The JSE fell on Monday amid a flurry of global political and growth risks which continue to erode confidence from skeptic investors.

The reconvening of parliament in the United Kingdom further compounds the risk of Brexit, and in the USA an inquiry into the impeachment of Donald Trump was announced. These scenarios add more uncertainty to a global market which is struggling to come to terms with the impacts of the current trade war between China and the USA.

In Asia, the Hang Seng lost 1.28%, Shanghai Composite Index fell 0.77% while the Nikkei lost a more modest 0.36%. The major indices in Europe tracked mostly lower on the day while in the USA the Dow Jones was the only index to post gains at the open. 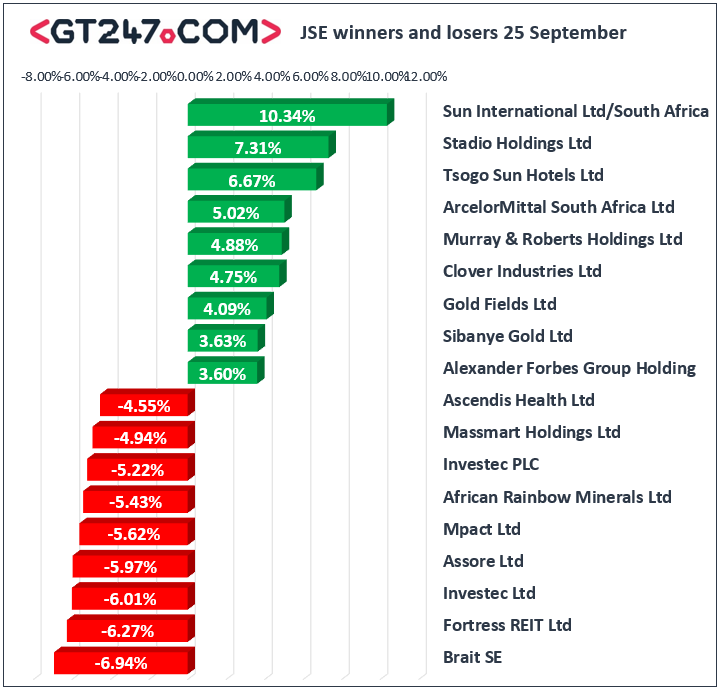 Hospitality stocks closed some of the day’s top gainers after gains were recorded for Sun International [JSE:SUI] which rose 10.34% to close at R48.32, as well as Tsogo Sun Hotels [JSE:TGO] which advanced 6.67% to close at R40.16. Gold mines recorded another session of gains as the rand-denominated price of gold was bolstered by the weaker rand. Gold Fields [JSE:GFI] advanced 4.09% to close at R81.20, Sibanye Stillwater [JSE:SGL] added 3.63% to close at R20.83, and AngloGold Ashanti [JSE:ANG] gained 2.185 to close at R312.31. Cigarette manufacturer British American Tobacco [JSE:BTI] managed to post gains of 1.64% to close at R540.70, while listed property stock Capital & Counties [JSE:CCO] advanced 2.56% to close at R42.00.

The JSE All-Share index lost 1.54% while the JSE Top-40 index fell 1.4%. All the major indices closed lower on the day with biggest losses being recorded for the Financials index which lost 2.13%. The Industrials and Resources indices lost 1.58% and 0.88% respectively.

Losses in brent crude extended as information broke out that production in Saudi Arabia was coming back online. It was recorded trading 1.66% weaker at $62.08/barrel just after the JSE close.