The local bourse closed softer on Thursday on the back of broad-based losses across all the major indices.

Although the losses were modest, this weakness persisted for the duration of today’s session. This contrasted with the trend in global markets where stocks continued to ride the trade optimism which arose on Wednesday, on the back of hints that the USA would not hike tariffs on China at the next deadline of 15 December. Economic data out of South Africa, and more importantly GDP numbers were disappointing this week, which is also a factor which has added to the current pessimism on the local market.

The rand weakened against the greenback despite the US dollar trading softer against a basket of major currencies. The rand bottomed out at a session low of R14.69/$ before it was recorded trading 0.46% weaker at R14.65/$ at 17.00 CAT. 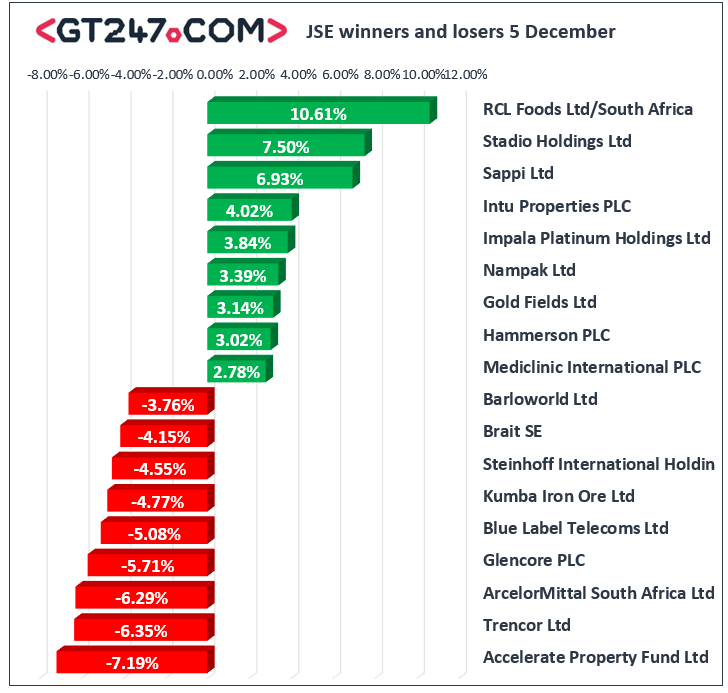 The JSE All-Share index eventually closed 0.23% softer while the blue-chip JSE Top-40 index shed 0.45%. The Resources index eked out some gains towards the close eventually closing 0.11% firmer. The Financials and Industrials indices lost 0.52% and 0.57% respectively.

Brent crude remained buoyant as it was recorded trading 0.65% firmer at $63.40/barrel just after the JSE close.