The JSE fell on Tuesday as it took a leaf from the Asian markets session where the major indices closed lower.

The Shanghai Composite Index came under significant pressure as it lost 1.68% while the Hang Seng lost 1.23%. The Japanese Nikkei was flat as it only added 0.06%. Stocks in Europe traded mostly flat on the day while in the USA the major indices opened marginally softer.

Investors continued to assess the potential impact from the disruption of oil supplies due to the attack on the Saudi Arabian pipeline. In addition to that, markets are tentative ahead of the US Fed’s interest rate decision which is expected to be announced on Thursday at 20.00 CAT. The Fed is forecasted to cut the interest rate by 25 basis points to 2.00%. Locally, the South African Reserve Bank is also expected to announce its interest rate decision on Thursday at 14.00 CAT, in which it is forecasted to keep the repo rate unchanged at 6.50%. 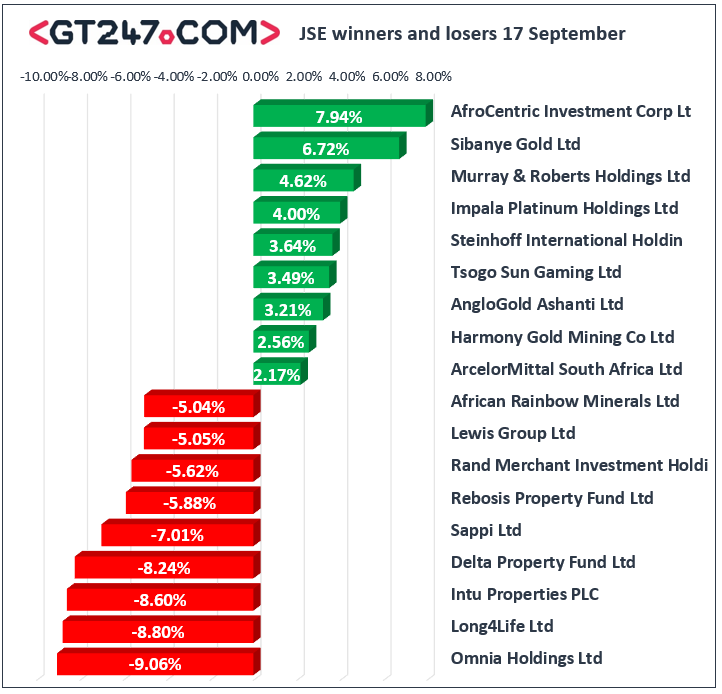 The JSE All-Share index eventually closed 1.66% lower while the JSE Top-40 index lost 1.79%. the Financials index came under immense pressure as it fell 2.64%. The Resources and Industrials indices lost 0.7% and 1.83% respectively.

Brent crude prices tumbled following the announcement by OPEC that they would be able to resume full output sooner than expected. The commodity was trading 5.91% lower at $64.92/barrel just after the JSE close.