The JSE rose on Friday primarily on the back of gains recorded on the mining index as well as advances from all the major indices.

The local bourse took a leaf from trading in Asia where stocks rallied on the back of more solid bets for a US Fed rate cut at the next policy meeting. There are now arguments suggesting that the Fed could actually tussle between deciding to cut rates by either 25 or 50 basis points, However the Fed fund futures index does indicate that market participants are currently pricing in a 25-basis points rate cut.

In mainland China the Shanghai Composite Index rallied 1.05%, while in Hong Kong the Hang Seng managed to rise 1.07%. In Tokyo the Japanese the Nikkei closed 2% higher. Gains were fairly modest in across the major European bourses while in the USA markets managed to open firmer.

On the JSE, Pioneer Foods Group [JSE:PFG] rocketed on the back of the news that Pepsi Co had agreed to buy the company for about R110 per share which is a significant premium to where it is currently trading. The stock climbed 32.09% to end the day at R102.50. Pioneer’s biggest shareholder Zeder Investments [JSE:ZED] surged 23.17% to close at R4.89 as it is expected to vote in favour of the buyout. Anheuser-Busch InBev [JSE:ANH] was buoyed by news that the company had agreed to sell Carlton and United Breweries to Asahi Group. The share eventually closed the day 5.02% higher at R1296.56. 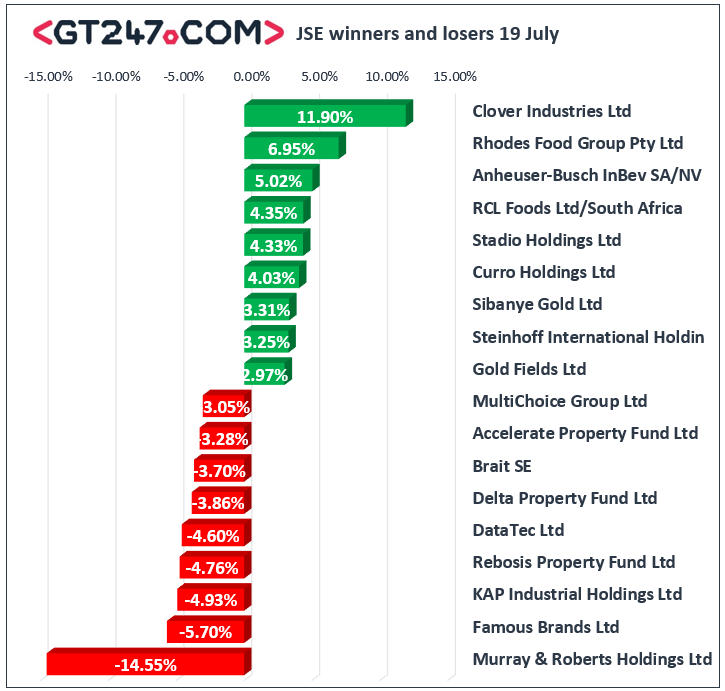 Murray and Roberts [JSE:MUR] tumbled 14.55% to close at R11.80 following news that the Competition Tribunal had been advised to reject ATON’s proposed buyout of Murray and Roberts [MUR]. Delta Property Fund [JSE:DLT] came under pressure on the day as it lost 3.86% to close at R1.99, while Rebosis Property Fund [JSE:REB] weakened by 4.76% to end the day at R0.60. PPC Limited [JSE:PPC] retreated mainly on the back of its full-year results which showed a decline in basic earnings per share. The stock lost 2.91% to end the day at R5.00. Other significant losers on the day included KAP Industrial Holdings [JSE:KAP] which lost 4.93% to close R5.40, and Multichoice Group [JSE:MCG] which shed 3.05% to close at R132.45.

The JSE Top-40 index managed to add 0.72% while the broader JSE All-Share index firmed 0.4%. All the major indices managed to advance in today’s session. The Resources index was the biggest gainer as it added 1.25%, while the Financials and Industrials indices rose 0.4% and 0.29% respectively.

Brent crude remained relatively muted in today’s session before it was recorded trading 0.34% firmer at $62.13/barrel just after the JSE close.