The lack of progress with the US-China trade talks further heightened investors’ concerns on Friday which led to most global stock indices trading weaker.

Adding to the economic growth concerns flagged by the European Union on Thursday, skepticism spread as US president Donald Trump said that he did not plan to meet his Chinese counterpart before the March 1st deadline set for a trade resolution. This new development lengthens the period of uncertainty    before concrete resolution is reached.

The JSE was not spared from the losses as most of the bourse’s heavyweights traded under pressure. Sasol [JSE:SOL] had the biggest loss amongst the blue chips as it fell 6.5% to close at R384.78. This was after the company issued a trading statement indicating the Lake Charles Chemical Project in the USA had been delayed and would incur additional capital expenditure. Blue Label Telecoms [JSE:BLU] fell 4.65% to close at R4.31, while Brait [JSE:BAT] lost 3.06% to end the day at R27.53. Rhodes Food Group [JSE:RFG] struggled significantly eventually closing the day 7.39% lower at R16.16. Cement maker PPC Limited [JSE:PPC] dropped 5.76% to close at R5.40, while KAP Industrial Holdings [JSE:KAP] lost 3.25% to close at R8.34. 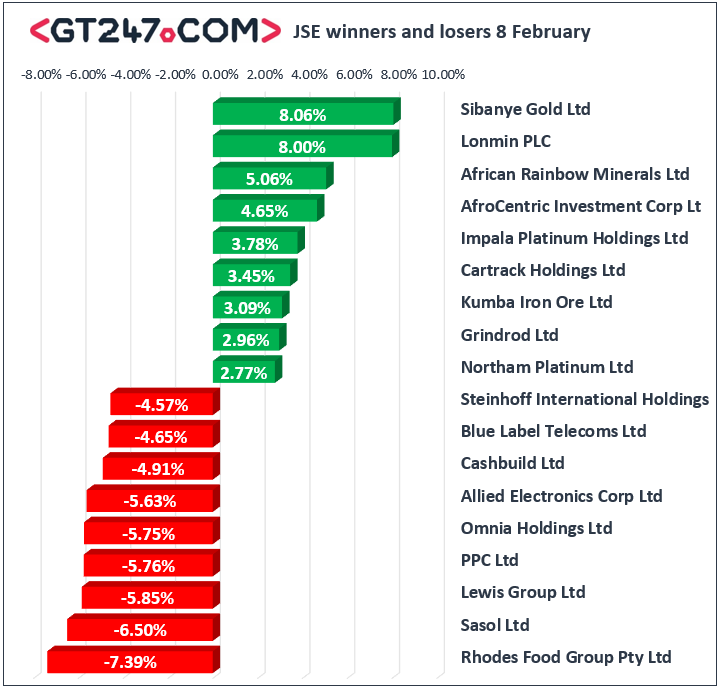 After managing minor gains during the day’s session, the rand retreated to trade flat at R13.62/$ at 17.00 CAT.

Brent crude recovered from an earlier slump to trade 0.67% firmer at $62.04/barrel just after the JSE close.