The local bourse started the week on the slide as it closed weaker mainly due to subdued global sentiment.

Investors continued to assess the impact of the coronavirus particularly to global growth with most sectors taking a rather cautious approach. There are still broader concerns over the spread of the virus and how prepared health authorities are to contain it. However, it seems investors are shifting their focus to primary economic indicators in order to gauge the extent of the impact.

Locally there were no economic data releases, therefore the local bourse tracked mostly lower in line with global markets. The rand which weakened significantly over the past week remained mostly subdued in today’s session. The local currency found some momentum earlier as it peaked at a session high of R14.97/$ before it was recorded trading 0.21% firmer at R15.02/$. 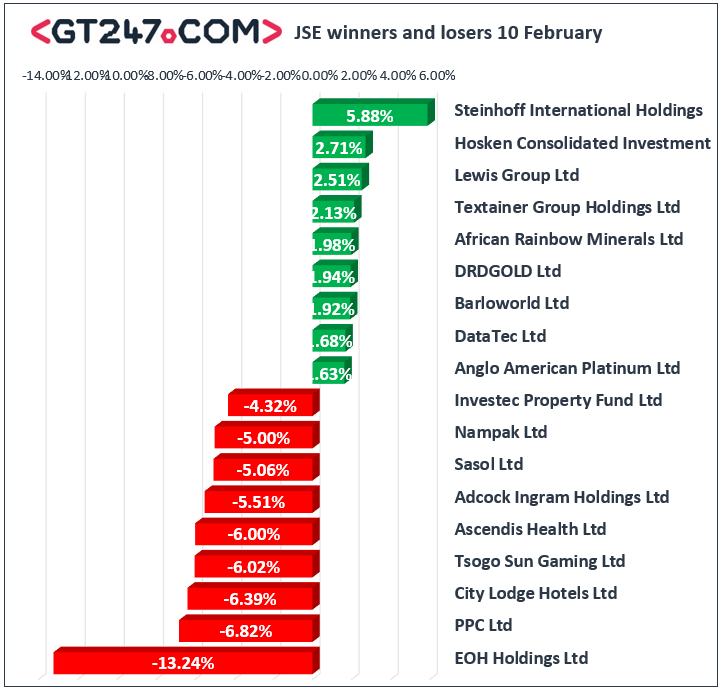 Intu Properties [JSE:ITU] was buoyed by the release of a statement in which the firm indicated that it is in discussions with key stakeholders in relation to a proposed equity raise. The share rocketed 24.03% to close at R3.20. Northam Platinum [JSE:NHM] surged on the back of the release of a positive half-year trading update which saw the stock gain 1.6% to close at R43.85. Other platinum miners also advanced on the day with gains being recorded for Anglo American Platinum [JSE:AMS] which rose 1.63% to close at R1198.81, and Impala Platinum [JSE:IMP] which added a more modest 0.85% to close at R148.00. Gains were also recorded for Kumba Iron Ore [JSE:KIO] which gained 1.35% to close at R341.05, and Mediclinic [JSE:MEI] which closed at R75.55 after losing 1.33%.

Brent crude remained subdued as it was recorded trading 0.97% weaker at $53.95/barrel just after the JSE close.