JSE eases as investors take profit after the biggest one-day rally in three years, the All-Share consolidated down 0.69%, with the blue-chip Top40, down 0.86%, financials down, 1.18% and industrials down, 0.56%.

The local currency was trading cautiously, ahead of newly elected President, Cyril Ramaphosa’s state of the nation address tonight and next week’s budget speech. We saw the rand trading at R11.66 to the dollar, R16.38 to the pound and R14.54 to the euro. 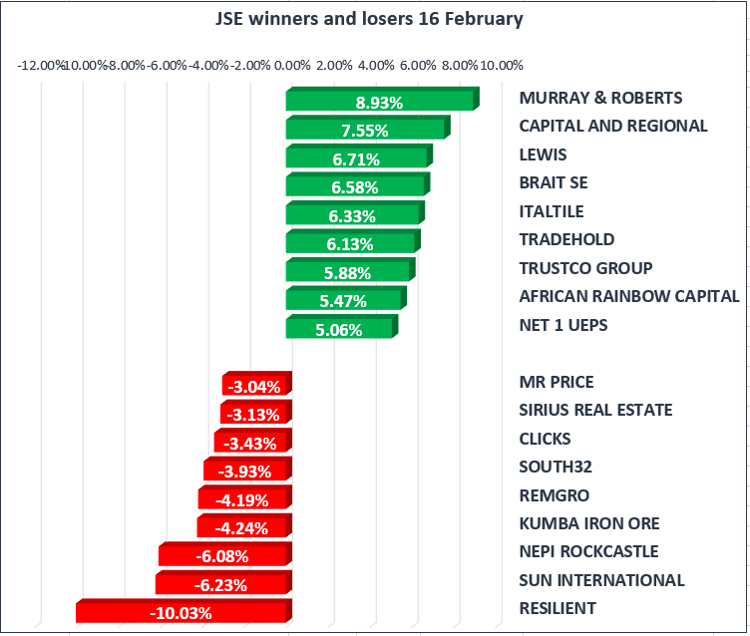 Commodity prices traded mixed on the day, as the U.S. dollar index rebounded from a three-year low earlier in the session off the back of strong U.S. housing data.

A quiet day for Asian equities as most markets were closed for the Lunar New Year holiday, Japan’s Nikkei was up 1.19% on the day, and 1.58% for the week, after Haruhiko Kuroda was nominated to lead the Bank of Japan for another five-year term.

Elsewhere, European markets continued to rally as investor confidence rose amid strong earnings, the DAX was higher by 0.82%, the CAC-40 by 1.04% and the FTSE by 0.86% at the time of writing.

Bitcoin climbed above $10,000 in intraday trade, as regulatory fears faded after South Korean officials seemed to pivot towards a more ‘friendly’ regulatory approach of the crypto industry.