JSE rebounds on the back of US index record highs

The local bourse closed firmer on Tuesday as it tracked other global markets higher.

The sea-saw action in financial markets continues despite the ongoing risks associated with the coronavirus. The gains in today’s session seem to have been triggered by another record high trading session in the USA on Monday. 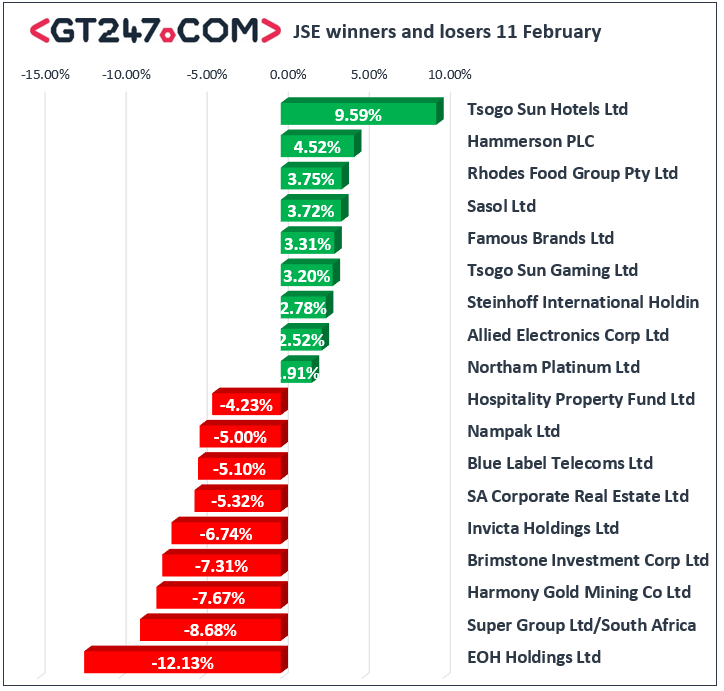 Intu Properties [JSE:ITU] released a follow up statement to the one released on Monday, stating that Linked Real Estate Investment Trust was no longer participating in the recapitalization of the company. The share plummeted 32.81% to close at R2.15. Harmony Gold [JSE:HAR] came under pressure despite reporting an increase in earnings for the interim period ending 31 December 2019. The share closed 5.74% lower to close at R42.67. Declines were also recorded for other gold miners such as AngloGold Ashanti [JSE:ANG] which lost 2.94% to close at R286.01, as well as Gold Fields [JSE:GFI] which dropped 1.98% to close at R97.74. The Spar Group [JSE:SPP] declined 3.77% to close at R186.50 despite releasing a modest trading statement, while Pick n Pay [JSE:PIK] also slipped 1.72% to close at R64.00 despite the firmer rand.

The JSE All-Share index eventually closed 0.23% firmer while the blue-chip JSE Top-40 index rose 0.38%. The Financials index managed to eke out gains of 0.14%, while the Industrials and Resources indices rose 0.27% and 0.51% respectively.

Brent crude rebounded along with global stocks as it was recorded 1.99% firmer at $54.33/barrel just after the JSE close.