With the thought of a recession on every investor’s radar, the pursuit of safe-haven assets remains the order of the day as investors search desperately for a safety net. Treasury bond yields for developed markets have continued to decline with investors even seeking negative yielding Treasury bonds from some European countries.

In Asia stocks traded mixed as the Hang Seng had some relief as it gained 0.76% while in China the Shanghai Composite Index added 0.31%. In Japan the Nikkei came under significant pressure to end the day 1.21% lower. All the major indices in Europe tracked lower on the day, while in the USA stocks off shelved the trade war concerns as they opened firmer.

On the JSE, Gold Fields [JSE:GFI] came under significant pressure despite reporting a return to profitability in its half-year results released on Thursday morning. The miner tumbled 9.76% to close at R80.93. Commodity trading giant Glencore [JSE:GLN] fell 3.63% as it closed at R41.16, while mining giant Anglo American PLC [JSE:AGL] lost 3.49% to close at R313.18. Other significant losses on the day were recorded for Steinhoff International [JSE:SNH] which lost 5.6% to close at R1.18, African Rainbow Minerals [JSE:ARI] which dropped 5.1% to close at R152.23, and Richemont [JSE:CFR] which fell to R115.00 after losing 2.46%. 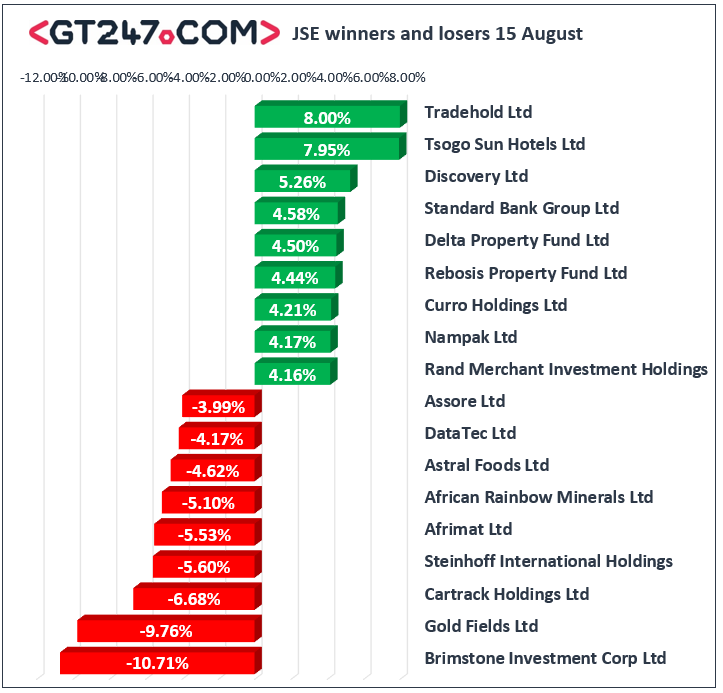 The JSE All-Share index eventually closed 0.49% lower while the JSE Top-40 index shed 0.33%. The Financials index was buoyed by the firmer rand which saw the index climb 2.35%. The Resources and Industrials indices fell 2.15% and 0.64% respectively.

Brent crude slipped further in today’s session and it was recorded trading 2.61% weaker at $57.95/barrel just after the JSE close.