The JSE pulled back on Monday as emerging markets came under pressure following Donald Trump’s comments about Chinese and European currencies.

The US president made comments implying that China was artificially devaluing its currency to boost its exports in response to the current trade war between the two countries. This resulted in the US dollar advancing following the significant weakness recorded towards the end of last week. The US dollar index rebounded to reach a session high of 94.607 index points.

Locally, the rand slipped to a session low of R13.57 against the greenback as a broad-based emerging market currency sell-off ensued. The rand recovered marginally to trade at R13.49/$ at 17.00 CAT.

Naspers [JSE:NPN] fell after its Hang Seng listed associate, Tencent Holdings, closed 1.49% weaker. Subsequently, Naspers traded under pressure and it dragged the All-Share index with it. The share lost 1.68% to close at R3370.20 per share. Healthcare stocks, Life Healthcare [JSE:LHC] and Mediclinic [JSE:MEI] lost 2.31% and 2.85%, to close at R24.12 and R90.66 per share respectively. 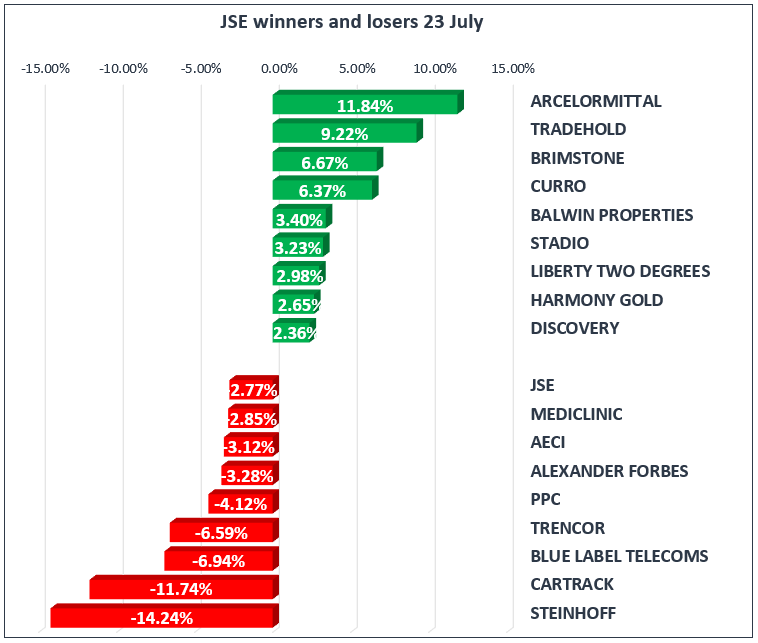 The JSE All-Share index eventually closed 0.76% weaker while the JSE Top-40 index lost 0.83%. The Resources index barely managed to close positive after only adding 0.03%. The Industrials and Financials indices lost 1.29% and 0.35% respectively.

Following a slow start, brent crude inched higher to reach a session high of $74.50/barrel. It retraced to trade at $73.57/barrel just after the JSE close.