The JSE closed mildly firmer on Thursday as markets remained buoyant following significant gains over the past two sessions.

In today’s session the rally was spurred by news that China plans to cut tariffs on $US75 billion worth of American imports which gave further impetus for investors to seek riskier assets. China also recently announced a cut in the reserve requirement for Chinese banks in a move aimed at improving liquidity in the markets. These active steps to promote growth are giving investors confidence that the impacts of coronavirus will not have a major impact on the global economy.

There was some disappointment locally as the SACCI Business Confidence index for January fell to 92.2 from a prior recording of 93.1. The rand weakened significantly prior to the release of this data as it reached a session low of R14.88/$. The rand was trading 0.59% weaker at R14.85/$ at 17.00 CAT. 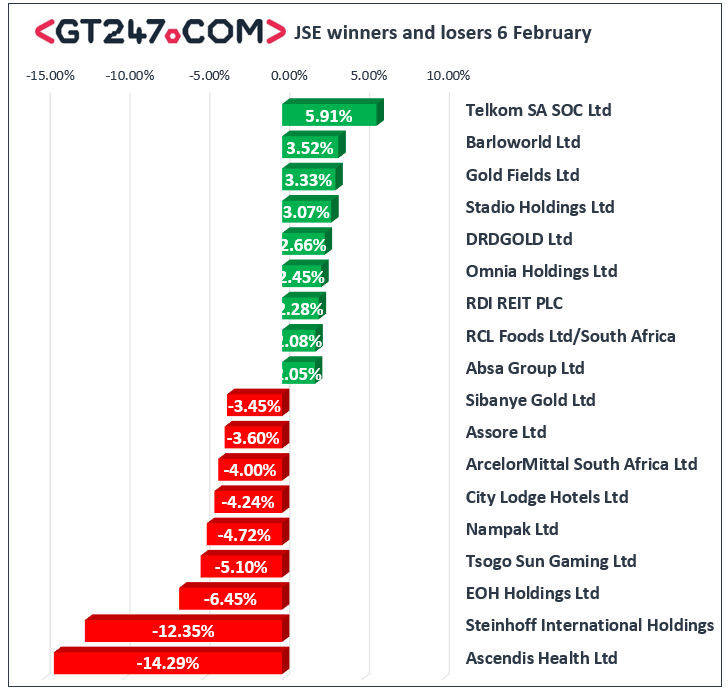 The volatile trading on Steinhoff International [JSE:SNH] continued as the stock peaked at a session high of R1.65 before it slipped to a session low of R1.33. Eventually the share closed 12.35% lower at R1.42. Tsogo Sun Gaming [JSE:TSG] also came under significant pressure as it fell 5.1% to close at R10.05. while Sibanye Gold [JSE:SGL] slipped 3.45% to close at R37.25. Assore [JSE:ASR] traded softer on the back of the release of a weaker trading statement in which the miner highlighted tough trading conditions. The stock closed 3.6% weaker at R232.02. Impala Platinum [JSE:IMP] traded weaker despite reporting a significant increase in earnings in its trading statement. The stock closed 3.42% lower at R145.11. Harmony Gold [JSE:HAR] also struggled despite releasing a positive trading statement as it lost 2.93% to close at R45.70.

The JSE Top-40 index closed 0.25% firmer while the broader JSE All-Share index gained 0.18%. The Resources index came under mild pressure as it lost 0.43%. The Industrials and Financials indices gained 0.34% and 0.91% respectively.