The JSE closed firmer on Wednesday after a relatively flat trading session.

Global markets were tentative on Tuesday as the UK parliament was scheduled to vote on Prime Minister Theresa May’s Brexit deal. The vote was a resounding no, however US equity markets were unperturbed as they closed firmer on Tuesday, and even extended gains in today’s trading session. In Asia, weakness was recorded on the Japanese Nikkei which shed 0.55%. In mainland China, the Shanghai Composite Index closed flat while the Hang Seng inched up 0.27%.

US equity futures were buoyant on the back of good earnings releases from some of the USA’s biggest banks namely Goldman Sachs and Bank of America, which saw the cash market open firmer. This positive sentiment was evident on the major equity bourses in Europe and on the JSE.

On the local front, there was disappointment as mining production data for November reflected a significant contraction. MoM Mining Production contracted by 5.8% which missed the forecasted expansion of 2.5%, while YoY it decreased by 5.6% missing an estimated growth of 1%. As a result, the resources index on the JSE traded under significant pressure. 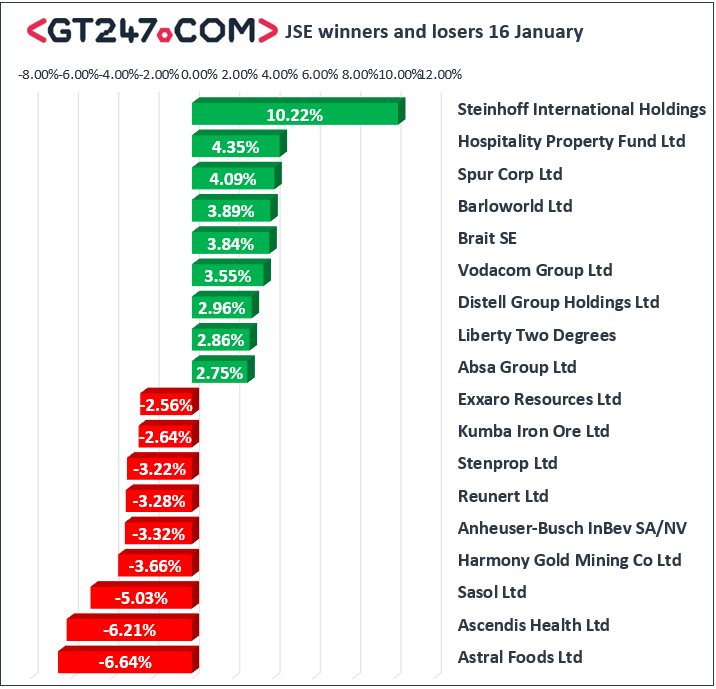 The JSE All-Share index eventually closed 0.47% firmer, while the JSE Top-40 index inched up 0.6%. The Resources index fell 1.26%, however decent gains were recorded for the Financials and Industrials indices which gained 1.11% and 1.09% respectively.

Brent crude was trading flat at $60.69/barrel just after the JSE close.