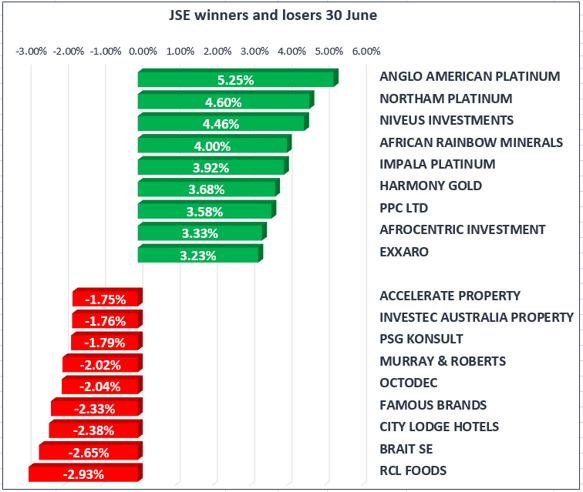 South African trade data for May continued to reflect an improving trend, with a trade surplus recorded for the fourth month in succession. The surplus widened to R9.5 billion in May and the cumulative surplus for the first five months of the year rose to R19,52 billion, a significant improvement from the R13,29 billion deficit over the same period in 2016.

The value of total exports was up by 0,5% y-o-y, with mineral products up by 38,5% y-o-y, chemical products increased by 19,3% and base metals rising by 8,9%. Precious stones, electrical equipment and vehicles & equipment recorded further declines.

China's manufacturing activity accelerated more than expected in June, suggesting the world's second-largest economy continues to confound expectations for a slowdown. The official manufacturing PMI rose to 51.7, compared to a reading of 51.2 in May.

Iron ore rallied back into bull market territory, driven by a surge from Chinese mills boosting purchases to replenish inventories, with higher-grade ore in demand.  Prices in Qingdao have racked up their biggest monthly increase since October, closing at $64.95/dry metric ton - its highest settlement since May 4.

The US economy will enter its ninth year of expansion in July. On Thursday, First quarter US GDP growth was revised upwards as new data suggests that the US economy grew faster than initially thought, increasing 1.4%.

Gold prices edged lower on Friday to $1243/Oz. The precious metal is still weighed down by the previous session's upbeat U.S. economic growth data, although hawkish comments by several central banks limited the greenback's gains.  Gold is sensitive to moves in U.S. rates, which lift the opportunity cost of holding non-yielding assets such as bullion.