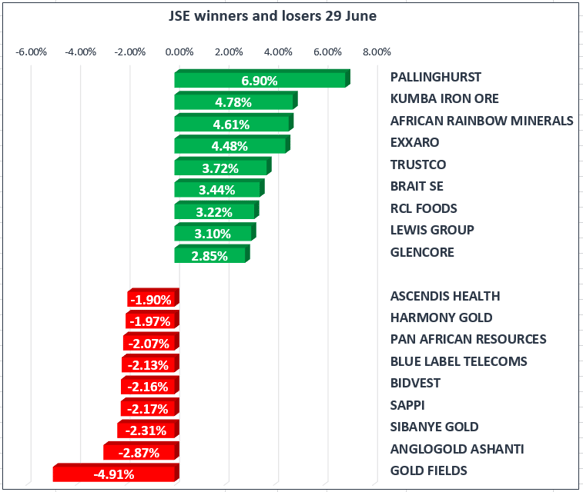 The rand weakened beyond R13.00 to the greenback despite producer inflation data meeting expectations. The producer price index (PPI) came in at 4.8% year on year in May from 4.6% in April, with the increase linked to higher petrol prices. This impacts lower forecasted inflation may hint towards a rate cut in the second half of the year.

Global government bond prices slumped for a third day, while the dollar fell further against several developed-market currencies, as investors continue to digest messages signalling the end of easy-money policies. It follows statements from the Bank of England, Bank of Canada and the European Central Bank, with Western policymakers rewriting the outlook for markets.

The blue-chip Top40 slipped 0.64%, followed by the All Share edging 0.47% lower.  The drawdown on the market was broad based, with only diversified mining stock leading gains on the JSE.

Naspers [JSE:NPN] continues to slide, dropping 1.16% to R2580.00 per share – widening the discount to its Chinese investment, Tencent.  Naspers is now trading more than 26% below the market value of its stake in Tencent, as investors continue to punish the share for continued destruction of value in other sectors of the business.

Woolworths [JSE:WHL] slipped 0.85% to R62.05 per share, as investors start to take account for mounting competition in the high LSM retail category.  Pick n Pay as well as Checkers are gaining market share of the premium and convenience food market.

Australia remains an uncertain and challenging market for Woolworths. Executive management attention has been diverted between two distinct geographies, South Africa and Australia, each with its own difficulties and peculiarities. Australia is now 44% of sales and 42% of operating profit.

Gold traded at $1251/Oz at the close, buoyed by a slump in the dollar as U.S. political uncertainty resurfaced after the Senate's decision to delay a vote on a healthcare bill raised fresh doubts about President Trump's ability to deliver on his pro-growth economic agenda.  This slump has boosted demand for gold as traders sought safe have protection from political uncertainty.

Oil prices have been under pressure in recent weeks as concern over rising U.S. shale output cancelled out production cuts by OPEC and non-OPEC members.