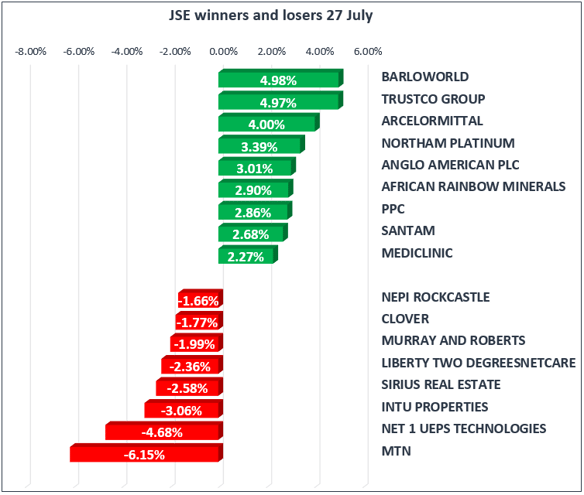 The JSE managed to remain in the green on Thursday, thanks to support from resource stocks and gold miners, after rapidly cooling off towards the end of the trading session.  Earlier in the day the market appeared to be closing in on an all-time high, however the rand gave back gains as the dollar recovered.

The rand closed weaker, as the dollar index recovered from its lowest level in over a year after the US Fed signalled that it would be looking to offload assets and normalise its balance sheet “relatively soon”.   The central bank kept rates on hold yesterday and made no changes to its overall policy.

MTN dropped off 6.77% to R118.95 after releasing a trading statement indicating that its headline earnings per share would be between 210 – 230 cents.  This number was lower than what analysts had expected.  MTN claimed that the company is on the road to profitability after suffering a loss in the previous year due to a $1.1bn fine paid to the Nigerian authorities.

South African annual producer inflation eased to 4% in June from 4.8% in May, lower than the markets expectation of 4.3% and slowing to the lowest annual growth rate since September 2015. The main drivers of the annual number were the ‘food products, beverages and tobacco products’ as well as the ‘coke, petroleum, chemical, rubber and plastic products’ categories.

The annual PPI for mining declined 1.5% after falling by 3% in May.  Annual producer inflation for agriculture, forestry and fishing declined by 1.4% with the main contributor coming from agriculture as the effects of the drought dissipate.

Crude Oil climbed 0.90% to $51.43/bbl as the latest round of OPEC promises kicked off. Kuwait's state run oil company has pledged to cut sales volumes of oil for 2017, one day after the UAE promised to cut its own crude exports by 10% starting in February, and just two days after Saudi Arabia promised to curb oil exports starting in August.

Gold prices traded slightly below breakeven on Wednesday, weakening 0.14% to $1258/Oz as the dollar edged higher during the day.

In the US, Republican senators have shifted their focus to a so-called "skinny" healthcare repeal that introduces smaller changes to Obamacare. These include eliminating individual and employer insurance mandates, along with a few other provisions. It comes after the Senate voted against a straight repeal of the 2010 Affordable Care Act for the second time in 24 hours

The US Commerce Department said on Wednesday new home sales rose 0.8 percent to a seasonally adjusted annual rate of 610,000 units last month. May's sales pace was revised down to 605,000 units from the previously reported 610,000 units.