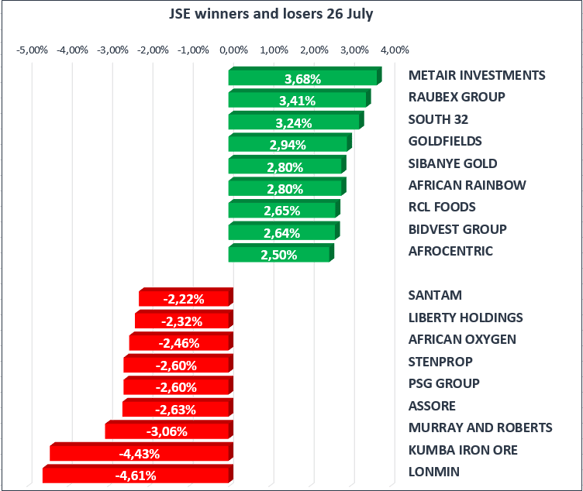 The JSE continued its positive momentum on Wednesday to reach a 52 week high.  All the major indices were in the green, while the rand weakened slightly to R13.01 as the currency remains supported by recent dollar weakness.

The US economy faces soft inflation data and political uncertainty centred on the administration of President Donald Trump.  Trump’s reflationary policies seem to be a distant possibility as the republican party fails to repeal the Affordable Care Act.

British American Tobacco [JSE:BTI] announced the completion of the acquisition of the remaining 57.8% of Reynolds American Inc.  the share gained 1.03% on the news and closed at R906.30

Brent crude traded 1.29% higher at $50.85/bbl as increased oil exports from the US are driving down inventory levels.  The weekly EIA Petroleum Status Report shows that crude oil exports averaged over 1 million barrels a day in the week ending July 21, 2017. This is up from 677 thousand barrels per day last year.

Gold prices edged lower on Wednesday as investors awaited the Federal Reserve’s policy statement for direction.  Gold slipped for a second day to $1248/Oz as pundits expect the Fed not to take any action on interest rates.

While the Fed is expected to keep its benchmark interest rate unchanged today, investors will be keeping a close eye on the central bank's statement. The focus will centre around updated language on inflation and the timing of a long-awaited balance sheet reduction.

Analysts believe the Fed will announce plans to sell some of the bonds acquired during its quantitative easing programme‚ which was put in place following the 2008-09 global financial crisis.