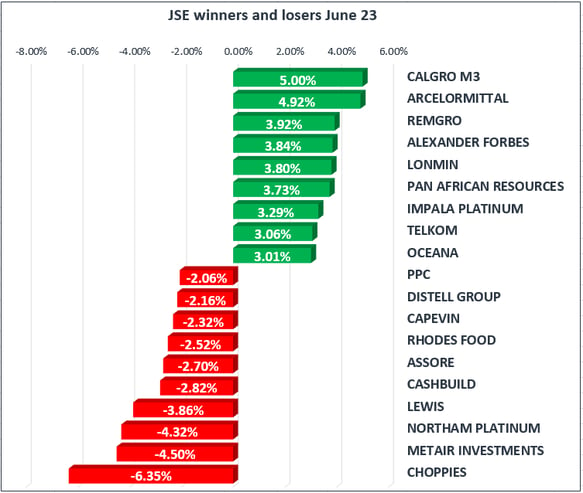 Gold recorded another day of positive gains as the US Dollar remained under pressure relative to major currency pairs, whilst investors on the JSE were eagerly awaiting Naspers’ full year results which were released this afternoon. The weakness in the US Dollar provided room for further Rand appreciation, and the local currency managed to reach intra-day highs of $12.91 against the greenback. At 5pm the USD/ZAR was recorded at R12.94/$.

The results from Naspers were more or less in line with the guidance provided in their trading statement which they released last week. Headline & core headlines earnings for the year increased by 41% and 10% respectively in US dollar terms, and as a result earnings per share and fully diluted earnings per share increased by 185% & 189% respectively. The stock closed firmer having traded in the green for the entire trading session, closing at R2615.41 per share, up 2.60% for the day. Due to the various business units of Naspers it is important to understand the components making money for the business & at present, Tencent Holdings, is definitely the cash cow.

The JSE All-Share Index closed up 0.84%, with the Top-40 Index firming .0.92%. The Financials Index was mostly positive on the day on the back of the firmer Rand, which saw it closing up 1.22%. Banking stocks closed in the green with the biggest gainer being Barclays Africa & Standard Bank which closed up 1.75% and 1.35% respectively. The Resources Index was positive on the day mainly due to the firmer commodity prices, withstanding the sell-off that we saw in Palladium in the afternoon. That index closed up 0.17%. The Industrials Index was also firmer eventually closing 0.99% firmer.

On the commodities side, the day was fairly mixed with Gold having a good upward move on the back of the weaker US Dollar. The precious metal scored highs of $1258.91 per ounce which supported most of the Gold miners on the JSE, and at the close it was recorded at $1255.57 per ounce. Platinum was mostly flat with no significant movements in the metal and at the JSE close It was trading at $927.45 per ounce. On the other hand, there was a sharp reversal in Palladium which looked very bullish in early morning trading. Palladium lost earlier gains to shed more than $20 during the course of the day, and it was trading at $863.94 per troy ounce when the JSE closed, after having managed to reach a high of $896.92 per troy ounce.

Brent Crude was trading in the green today, as it maintained its momentum from yesterday. The commodity has taken a break from consecutive sessions of losses on the back of generally bearish sentiment. Brent Crude was trading at $45.62 per barrel when the JSE closed, but this move did not filter onto Sasol as much as expected because of the firmer Rand. Sasol closed at R360.60 per share, up 0.17% as it managed to gain some momentum into the close.