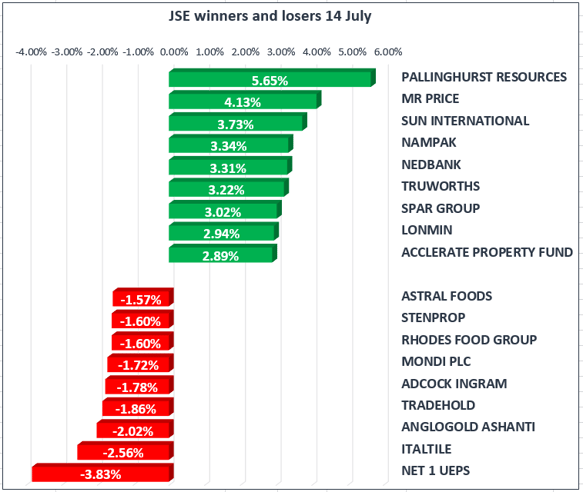 The JSE managed to close firmly in the green after a timid start to the day’s trading.

Despite a relatively quiet session in the morning, there was volatility in the Rand in the afternoon. This was after the Chamber of Mines announced that South Africa would not be pursuing the implementation of the new mining ownership law. The Chamber applied to the high court for an immediate injunction to prevent the law from being implemented.

The Rand strengthened significantly against the greenback this afternoon. This initial move was as a result of worse than expected Retail Sales & CPI data from the USA which sent the US Dollar sliding against major currency pairs. This set of data combined with the suspension of the implementation of the new mine ownership laws, saw the Rand reaching intra-day highs of R12.99 against the US Dollar.

Kumba Iron Ore (KIO) released a trading statement this morning which indicated that they are expecting Headline Earnings Per Share(HEPS) & Basic EPS (Earnings Per Share) to be up by between 46% & 59%, for the six months ended June 2017. This is a good earnings indication however it is important to note the high sensitivity of the KIO stock to currency and iron ore fluctuations as they have material impact on their revenues. Other important announcements were from Long4Life Ltd (L4L), which announced the acquisition of Sorbet Holdings.

The JSE All-Share Index eventually closed up 0.56%, with the blue chip Top-40 Index closing 0.54%. The Financials Index was propelled up in the afternoon by the firmer Rand and it managed to close up 0.60%. The Resources Index was mixed as commodity prices were trading weaker in early morning trading before being pushed higher by the weaker US Dollar. The Index closed up 0.61%. The Industrials Index managed to close up 0.55%.

In terms of economic data, the US released CPI month-on-month data which was recorded at 0.0% on the back of a forecast of 0.1%. The biggest disappointment was Retail Sales month-on-month which came in at -0.2% on the back of an estimate of 0.1%. As a result the US Dollar Index immediately dropped to an intra-day low of $95.156 before stabilizing at $95.257 when the JSE closed.

Commodities, particularly metals had a positive day. Gold tracked higher on the back of the weaker US Dollar and most of the move higher happened after the release of economic data from the USA. Gold managed to reach intra-day highs of $1232.95 per ounce before retracing slightly to trade at $1229.23 per ounce when the JSE closed.

Platinum and Palladium were also marginally firmer on the day and when the JSE closed they were trading at 919.55 & $861.70 per ounce respectively. Some of the platinum miners on the JSE closed in positive territory, with the likes of Anglo American Platinum & Lonmin chalking up gains of 1.77% and 2.94% respectively.

Brent Crude traded mostly flat today ahead of the release of the weekly Baker Hughes Rig Count, which measures the number of active shale rigs in the USA. The commodity was trading at $48.67 per barrel when the JSE closed, having managed to reach intra-day highs of $49.06 per barrel.