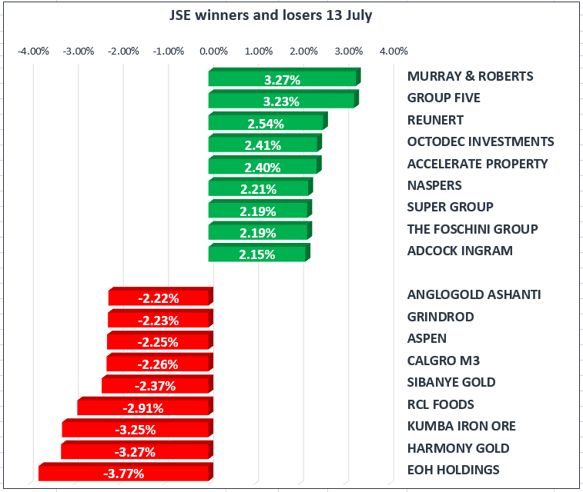 The JSE closed firmer today as it was buoyed by retailers and financials which gained on the back of the firmer Rand.

The Rand continued to score gains in today’s session reaching intra-day highs of R13.15 against the greenback before retracing slightly to trade at R13.26/$ when the JSE closed. This earlier strength in the Rand was mainly on the back of weakness in the US Dollar, which lost ground against major currency pairs as indicated by the US Dollar Index which reached intra-day lows of $95.464The US Dollar did recover marginally from this earlier weakness and was recorded at $95.828 when the JSE closed.

The JSE All-Share Index eventually closed up 0.75%, with the blue chip Top-40 Index firming 0.82%. The Financials Index benefitted from the strengthening Rand and closed up 1.13%. Miners on the JSE traded under pressure today due to weaker commodity prices as well as the stronger Rand, which saw the Resources Index closing down 0.06%. The Industrials Index closed up 0.92% mainly thanks to Naspers (Read fundamental note "A Hero Delivery...") which firmed by 2.21%, on the back of a move up in Tencent Holdings on the Hang Seng which closed up 1.14%.

On the international front, the USA released the weekly Initial Jobless Claims numbers which came slightly worse than expected, as claims increased to 247 000 on the back of an estimate of 245 000. We also had PPI month-on-month data which increased to 0.1% from a prior recording 0.0%. The other important event to note is US Fed Chair, Janet Yellen’s testimony to the US Congress. The key highlight from yesterday’s testimony was that the Fed is worried about inflation which is not catching up with the current level of US economic growth.

On the commodities front, most of the metals traded under pressure for most of today’s session. Gold shed marginal gains recorded in early morning trading as it managed to reach intra-day highs of $1224.50 per ounce. When the JSE closed it was trading at $1217.72 per ounce. The trend was the same in Platinum and Palladium which scored highs of $920.92 & $874.32 per ounce respectively, before being recorded at $906.94 & $858.72 per ounce when the JSE closed. As a result the Platinum Mining Index closed down 0.39%, whilst the Gold Mining Index closed down 1.95%.

Brent Crude was volatile in today’s session after the big draw in crude oil inventories that was recorded yesterday. The commodity managed to reach highs of $48.24 per barrel, however it subsequently came off to trade at $48.52 per barrel when the JSE closed. As a result Sasol was flat on the day managing to close up 0.02%.