Bullish day out for the JSE, International markets 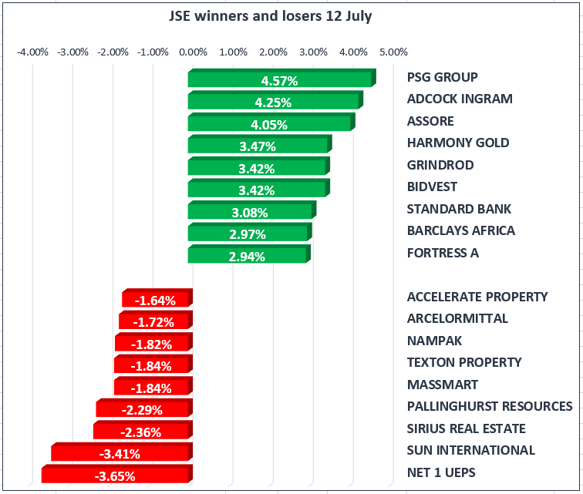 Bullish day out for the JSE, International markets

Markets firmed significantly on Wednesday amidst a strong performance by global markets.

At the close of the JSE, banking stocks emerged as key winners on the day – following the firmer rand and local bond prices.

Investors were cautious ahead of US Federal Reserve chairperson Janet Yellen’s testimony on monetary policy to the US Congress.

The rand strengthened 2.37% and closed at 13.24 against the US dollar.  This outcome followed the kneejerk drop and subsequent recovery in the U.S. dollar index seen during Yellen’s presentation.  The dollar stabilised subsequently, albeit slightly lower following the more dovish tone delivered by Yellen in her prepared remarks.

US markets rallied on the back of the dovish Fed speak, with the Dow 0.6% up near 21535 points at the close of the JSE.

After the close of the JSE, the Bank of Canada’s raised rates by 25 basis points to 0.75%. Markets have recently been confronted with the reality that global central banks have largely shifted to a "less dovish" stance as they prepare to follow the Fed's lead in the removal of accommodative monetary policy.

Crude oil prices rose by 0.55% to $47.82/bbl, extending gains into a third straight session, as investors looked ahead to weekly data from the U.S. on stockpiles of crude and refined products along with OPEC's monthly report on oil.  The U.S. Energy Information Administration reported a draw of 7.6 million barrels in crude oil inventories, dropping below 500 million barrels for the first time since January.

Gold prices edged 0.35% higher in trade on Wednesday, extending gains into a third straight session, as investors digested comments from Federal Reserve Chair Janet Yellen on policy direction.  Yellen said the Fed will need to keep gradually raising U.S. interest rates in the coming years, but not to levels seen in previous interest rate cycles. The marketplace has deemed her prepared text as favouring the dovish side of U.S. monetary policy.