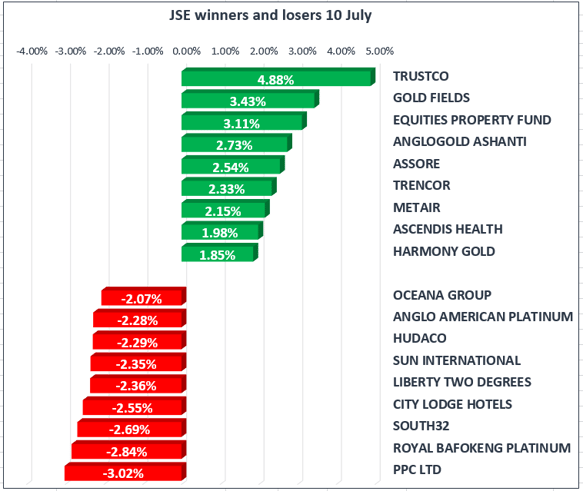 The JSE managed to close in positive territory across most sectors following a muted trading session earlier in the day.  Gold miners managed to recover from last week after the rand weakened against the US dollar.

The rand reversed early trade gains, and closed 0.26% weaker at R13.42 to the greenback.  The dollar index, which measures the strength of the US dollar against a basket of major currencies, increased only 0.13%

South African bonds firmed on Monday morning, but gave much of the gains by the close of the trading session.  The R186 long dated bond yield was trading at 8.845% near the close of the session, having strengthened from 8.93% on Friday last week.

The All Share Index closed 0.55% higher, whilst the blue-chip Top 40 gained 0.67%.  Markets were generally positive, however the gold mining index stood out for a 2.44% gain amidst weaker commodity prices.

Gold traded at $1212/Oz at the close of the JSE, down 7.5% from the recent high seen in early June.  The commodity remains under pressure, and has fallen to a three-month low amid a flurry of positive US jobs data released last week.  The growth in non-farm employment figures for June beat expectations, increasing the likelihood of the US Federal Reserve increasing interest rates again this quarter.

Data out of China indicates that the pace of inflation held steady at 1.5% in June to easily stay under the 3% target set by Beijing. Food prices declined 1.2% compared with the same period a year ago, while non-food prices were down 2.2% in the month. Producer prices jumped 5.5% to match the forecast from economists.