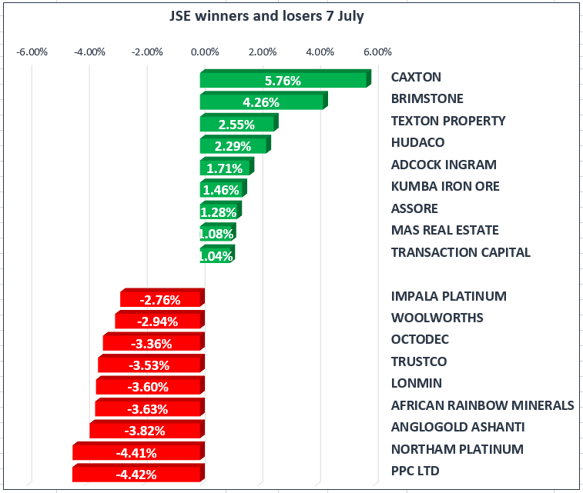 The JSE closed in the red for a second straight session as local equities traded under pressure for the entire session.

Only 5 stocks managed to close in the green on the JSE Top-40 Index.  Equities opened lower on the JSE today and continued to trade lower thereafter. The sell-off in local bonds continued, with the benchmark 10 year bond yield climbing up to 8.91%. This sell-off in bonds is not particular to South Africa, as developed markets bonds are also experiencing a relatively steep sell-off as indicated by the increase in yields over the past 2 weeks.

The USA released Non-Farm Payrolls data which came in better than expected, as the US economy added 222 000 jobs in June versus an expectation of 177 000 jobs. The US Dollar strengthened briefly just after the announcement, and almost immediately reversed and weakened. The unemployment rate increased marginally to 4.4% from 4.3%. This data is positive for the US economy and gives the US Fed more confidence to start tapering asset purchases sooner rather than later.

On the commodity front, metals are still trading under pressure and as a result Gold slid further in today’s session. The precious metal reached lows of $1209.30 per ounce, and when the JSE closed, it was recorded at $1210.76 per ounce. This movement dragged down Gold miners on the JSE & the Gold mining index weakened by 2.93%.

Platinum and Palladium were trading weaker in line with other metals. Platinum managed to reach lows of $902.88 per ounce, whist Palladium dropped to $835.47 per ounce. Platinum miners have been holding on well despite the downtrend in platinum prices, however today they traded weaker and the Platinum mining index shed 2.92%.

Yesterday Brent Crude reached highs of $49.18 after the big draw in US Crude Inventories, however it came off sharply after that and was trading lower today. The commodity reached lows of $46.28 per barrel in today’s session, dragging down with it Sasol which closed down 1.31%. Brent Crude was trading at $46.87 per barrel when the JSE closed.