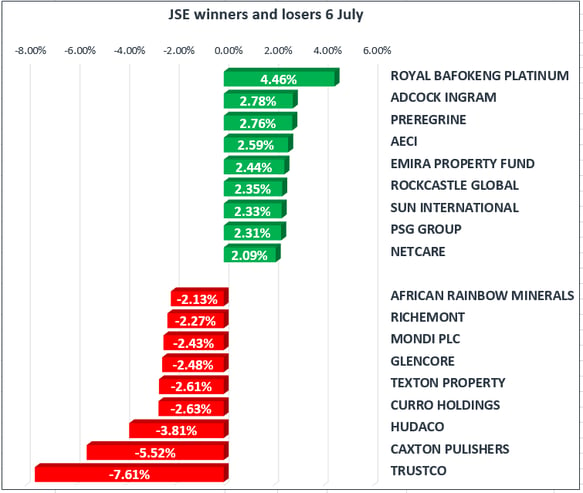 Local equities were dragged down by heavyweights such as Naspers and Richemont which traded lower for most of today’s session, eventually closing down 1.41% & 2.27% respectively. Financials and retailers were mixed because of volatility in the Rand relative to the US Dollar. The local currency managed to reach intra-day highs of R13.35 against the US Dollar in early morning trading, slightly improving from yesterday’s close of R13.40 to the US Dollar. It has subsequently weakened during the course of the day & was recorded at R13.45/$ when the JSE closed.

In terms of economic data, the SACCI Business Confidence Indicator for June increased to 94.9 from 93.2 which is a positive indicator for South Africa’s economy. Electricity consumption year-on-year increased by 3.4%, and electricity production increased by 4.6%.

The JSE closed lower with the JSE All Share Index weakening by 0.38%, whilst the blue-chip Top 40 Index closed down 0.52%. The Financials Index managed to close firmer as it gained 0.14%. Industrials were weaker and closed down 0.78% and the Resources Index also dropped 0.12%.

Economic data from the USA today was relatively weak as both ADP Employment Change and Initial Jobless Claims came in slightly worse than expected. As a result the US Dollar weakened as indicated by the US Dollar Index which broke down below $96 once again. Focus now shifts to the important US Non-Farm Payrolls expected tomorrow afternoon. This is the leading indicator of the health of the US economy and as such volatility is expected when the data is released.

Gold traded mostly flat for a second consecutive session despite the US Dollar losing ground against major currency pairs. Gold traded in a fairly narrow range between $1220.05 & $1229.35 per ounce, and as a result Gold miners on the JSE were trading mixed. The Gold mining index eventually closed up 0.32%

Platinum traded mostly flat as well, failing to gain any considerable upside from the US Dollar weakness. The metal managed to reach intra-day highs of $912.06 per ounce and was trading at $910.11 per ounce when the JSE closed. Nonetheless, most Platinum miners on the JSE were not deterred as stocks such as Anglo American Platinum & Royal Bafokeng Platinum closed up 1.57% & 4.46% respectively. Palladium was also trading in negative territory, and was recorded at $834.28 per ounce when the JSE closed.

Brent Crude was fairly stable during the day, but it spiked after the release of US Crude Inventories data at the close of the JSE. Inventories data showed a draw of 6.2 million barrels, on the back of a forecast of a draw of 1.7 million barrels. Brent Crude spiked up to an intra-day high of $49.18 per barrel immediately after the release of this data but unfortunately the release was right at the close of the JSE, therefore the move did not filter into Sasol. The stock closed the day down 0.63% at R372.88 per share.