Sharp move lower in Naspers drags down the JSE 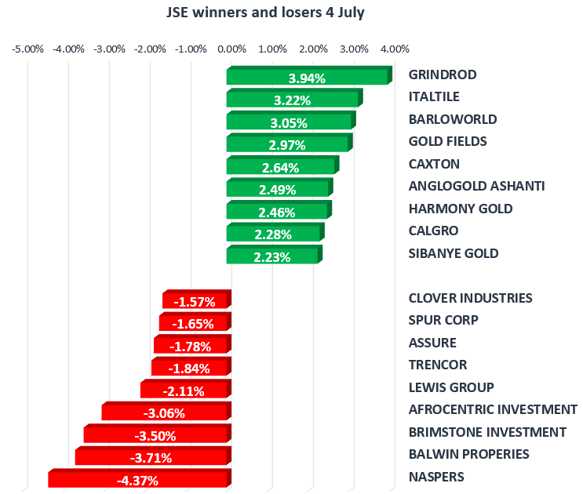 Sharp move lower in Naspers drags down the JSE

Naspers traded under significant pressure in today’s session on the JSE after its associate Tencent Holdings slid on the Hang Seng, closing down 4.13%.

According to Bloomberg, Tencent Holdings was under pressure mainly due to the news that the Chinese government was going to step up its scrutiny of online and mobile games. This was after a Chinese government owned newspaper criticised one of Tencent Holdings’ top grossing games for harming children in the pursuit of profits. The stock was down more than 5% at some stage in today’s session before it recovered slightly to close down 4.13%. Given the harsh extent of censorship in China, the possibility of one of Tencent’s cash cows getting banned is a worrying factor for investors.

The Rand was caught in volatile trade as it strengthened slightly in early morning trade to reach intra-day highs of R13.16 against the greenback. However this strength was short lived as the currency subsequently lost some ground to reach intra-day lows of R13.27 against the US Dollar. The US Dollar was relatively stable in today’s session as there wasn’t any data out of the USA due to their Independence Holiday. When the JSE closed the Rand was trading at R13.24/$.

The benchmark JSE All-Share Index closed in the red despite most of the stocks in the top 100 closing in the green. The index closed down 0.22% as big weightings Naspers and Richemont closed 4.37% and 0.28% lower, dragging down the broader index. The blue chip Top-40 Index was down 0.38%. Resources had a marginal recovery today after the sell-off that we had yesterday which saw the Resources Index eventually closing up 1.33%. The Financials Index also closed in positive territory firming by 0.70%, however, the Industrials Index was down 1.15%.

On the commodity front, metals staged a minor recovery despite trading lower in early morning trade. Gold managed to reach intra-day highs of $1226.59 per ounce which pushed the major Gold miners on the JSE higher, with AngloGold Ashanti closing up 2.49% & Gold Fields firming 2.97%. The metal was trading at $1223.10 per ounce when the JSE closed, Platinum and Palladium also turned positive in today’s session managing to reach highs of $916.50 per ounce & $862.90 per ounce respectively. Platinum miners benefitted from this strength which saw stocks such as Impala Platinum & Anglo American Platinum closing up 1.96% and 1.34% respectively. When the JSE closed Platinum was trading at $913 per ounce and Palladium was trading at $857 per ounce.

The positive trend in Brent Crude continued today as the commodity was 10 cents shy of reaching $50 per barrel, managing to reach intra-day highs of $49.90 per barrel. Sasol continued to benefit from this move as well as the relatively weaker Rand, and the stock closed up 0.53%.