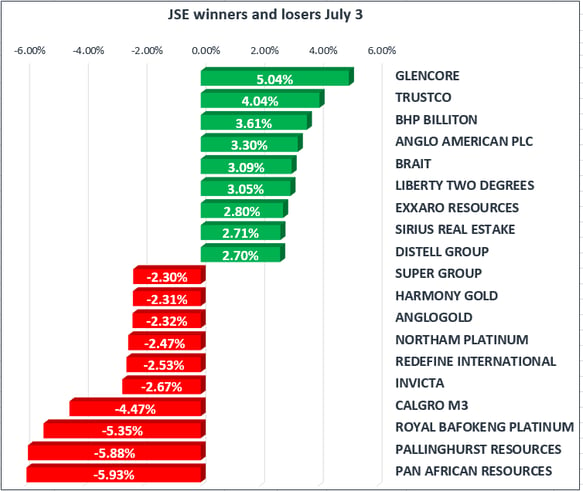 The JSE closed firmer in today’s trading session as the Rand slid to 4 week lows against the greenback.

Rand hedge stocks traded firmer mainly buoyed by the weaker Rand which weakened to intra-day lows of R13.23 against the US Dollar. This was mainly due to the recovery that was recorded in the US Dollar relative to major currency pairs, as evidenced by the US Dollar Index which broke above $96.

Locally, the Barclays Manufacturing PMI data released today disappointed as it was recorded at 46.7 on the back of a prior recording of 51.5. This is further evidence of declining manufacturing activity in the South African economy which is further bad news for job creation. Naamsa Vehicle Sales year-on-year marginally increased by 0.9%, this recording is significantly better than the prior recording which indicated a decrease of -2.6%.

The broader JSE All-Share Index closed up 1.07%, with the blue chip Top-40 Index firming 1.26%. The Resources Index benefitted from the weaker Rand and managed to close up 2.11% despite the sell-off in commodities that we saw in the afternoon. The Financials Index closed in the green as the index firmed by 0.61% mainly led by First Rand and Nedbank which closed up 1.55% & 0.71% respectively. The Industrials Index also managed to close in positive territory as it closed up 1.02%.

Sibanye Gold announced on SENS today that they have appointed Chris Bateman to head their US operations. He has previously served as the Chief Financial Officer of Stillwater Mining Company which was acquired by Sibanye Gold.

Gold continued to lose ground today carrying on from last week, mainly on the back of the firmer US Dollar. The commodity failed to find support at its 200-day moving average just above $1236 per ounce, and subsequently slid further reaching intra-day lows of $1222.49 per ounce. This move lower dragged down Gold miners on the JSE which saw AngloGold Ashanti and Gold Fields closing down 2.32% & 0.98% respectively. With the US Dollar starting to pick up once again, there is going to be less demand for safe haven assets such as Gold and therefore we should expect to see it under pressure in the short-term.

Platinum also had a sell off today dropping more than $19 as it reached intra-day lows of $904.69 per ounce. The metal was trading at $907.34 when the JSE closed. On the other hand, Palladium held on well as it managed to trade in the green for most of the day, but it eventually turned negative as a minor commodity sell off ensued. The metal reached intra-day lows of $839.90 per ounce before bouncing slightly to trade at $842.02 per ounce when the JSE closed. Platinum miners were fairly mixed on the JSE as the weaker Rand offset some potential losses, which saw some of the miners closing in the green.

Brent Crude continued to gain as the precious liquid reached 8 week highs of $49.42 per barrel. This move combined with a weaker Rand saw Sasol closing up 1.64% to close at R371.73 per share. Brent Crude was trading at $49.28 per barrel when the JSE closed.