JSE lifted by positive sentiment from China and Europe

Local stocks advanced on Friday as blue-chips led the gains mainly on the back of positive sentiment from Asia and Europe.

With President Donald Trump scheduled to meet a high-level negotiation team from China later on Friday, markets are upbeat that a deal will be reached before the March 1st deadline for tariff escalations. The Shanghai Composite Index closed 2.25% higher while the Hang Seng managed to add 0.65%. The Japanese Nikkei was weaker as it shed 0.18%. In Europe, all the major equity bourses were trading in the green. 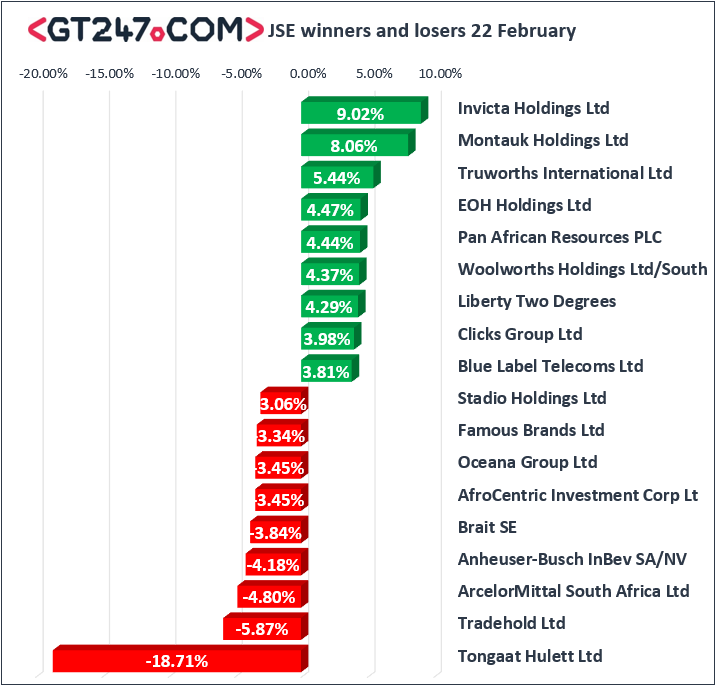 Tongaat Hulett [JSE:TON] plummeted following the release of a trading statement indicating that the company was expecting its headlines earnings to decrease by at 250% compared to the prior period. The stock lost 18.71% to close at R37.80. Northam Platinum [JSE:NHM] retreated as it reported a smaller loss in its half-year results compared to the prior corresponding period. The miner lost 0.58% to end the day at R51.85. Most of the miners also traded softer on the day which saw AngloGold Ashanti [JSE:ANG] close at R207.07 after dropping 3.02%, Gold Fields [JSE:GFI] dropped 0.92% to close at R57.27, and Sibanye Stillwater [JSE:SGL] added lost 0.33% to close at R15.00.

The JSE All-Share index held on to its gains to close 1.08% higher, while the JSE Top-40 index also managed to gain 1.08%. All the major indices recorded gains on the day with the biggest climber being the Industrials index which added 1.42%. The Resources and Financials indices gained 0.99% and 0.41% respectively.

Brent crude resumed its surge as it rallied to a peak at a session high of $67.73/barrel. It pulled back marginally to trade 0.57% firmer at $67.45/barrel just after the JSE close.