US equities responded positively when Donald Trump made a statement that he would not be imposing more tariffs on Chinese goods, as the former responded with a list of measures that they were prepared to take to resolve the trade war. Asian equities inched higher on Monday with the Shanghai Composite Index gaining 1.13% while the Hang Seng and Nikkei added 0.72% and 0.65% respectively.

On the currency market, the US dollar recorded a fifth consecutive session of weakness as speculators try to gauge the probability of a rate hike from the US Fed at the next policy meeting. The rand was buoyed by this weakness which saw it breach below R14/$ to reach a session high of R13.92/$. At 17.00 it had retraced to trade at R14.01/$.

Pioneer Foods [JSE:PNR] recorded a decent increase in earnings in its full-year earnings results released earlier on. Resultantly, the stock managed to gain 1.02% to close at R78.29. Platinum miners were among the day’s biggest gainers as Impala Platinum [JSE:IMP] rose by 8.13% to close at R33.50, while Anglo American Platinum [JSE:AMS] added 2.74% to close at R479.28. Retailers were also buoyant due to the firmer rand which resulted in Truworths [JSE:TRU] firming by 2.62% to end the day at R83.77, while Shoprite [JSE:SHP] closed at R191.05 after gaining 2.17%. 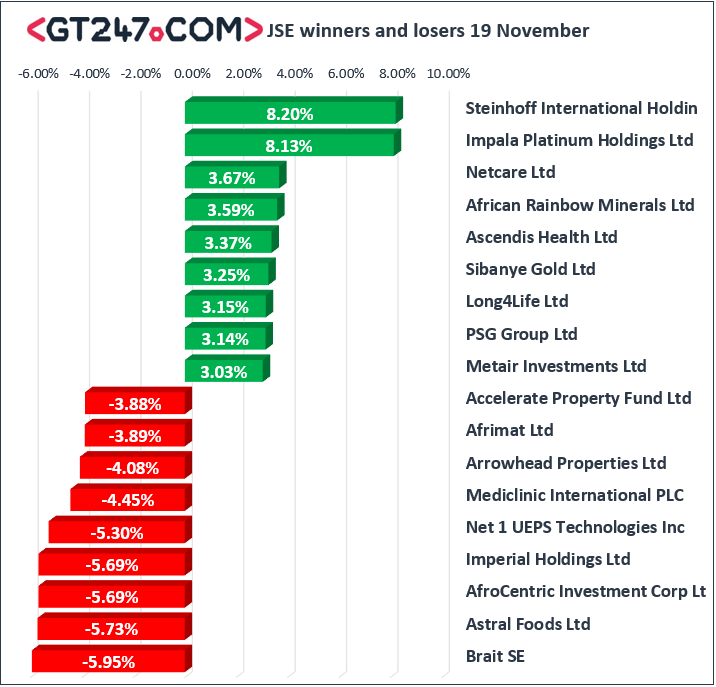 Naspers [JSE:NPN] released a trading statement towards the JSE close indicating that they were expecting a significant increase in their earnings for the half-year ended September 2018. The stock eventually closed the day up 1.67% at R2825.00. Ascendis Health [JSE:ASC] recorded another session of gains as it closed at R4.91 after adding 3.37%.

Astral Foods [JSE:ASR] came under pressure despite reporting a healthy increase in profit and revenue for the full-year, as traders price in the volatile industry the business operates in. The stock closed 5.73% weaker at R185.64. Barloworld [JSE:BAW] retreated by 0.81% to close at R114.96 as the company reported a decline in operating margin in its full-year results. Imperial Holdings [JSE:IPL] lost 5.69% to close at R143.00, while Mediclinic [JSE:MEI] fell 4.45% to R61.59.

Brent crude resumed its downtrend which saw it trading 1.62% weaker at $65.68/barrel just after the JSE close.