JSE holds on to gains despite losing steam towards the close

The local bourse attempted a minor rebound on Tuesday as it opened firmer along with most major global indices before momentum faded towards the close.

The JSE shrugged off weaker closes in Asian markets to open firmer as it tracked European and US equity futures higher. Headlines were grabbed by news that the US Treasury department had determined that China was manipulating its currency, following the slump in the yuan which was recorded on Monday. This has been fanned by the imposition of additional tariffs on Chinese goods by the USA, and now there is a high probability of a bigger hike in the tariffs that the USA could impose.

The rand stabilized in today’s session following the rout on emerging market currencies which ensued on Monday. The local currency strengthened to peak at a session high of R14.76/$ before it was recorded trading 0.17% weaker at R14.93/$ at 17.00 CAT. 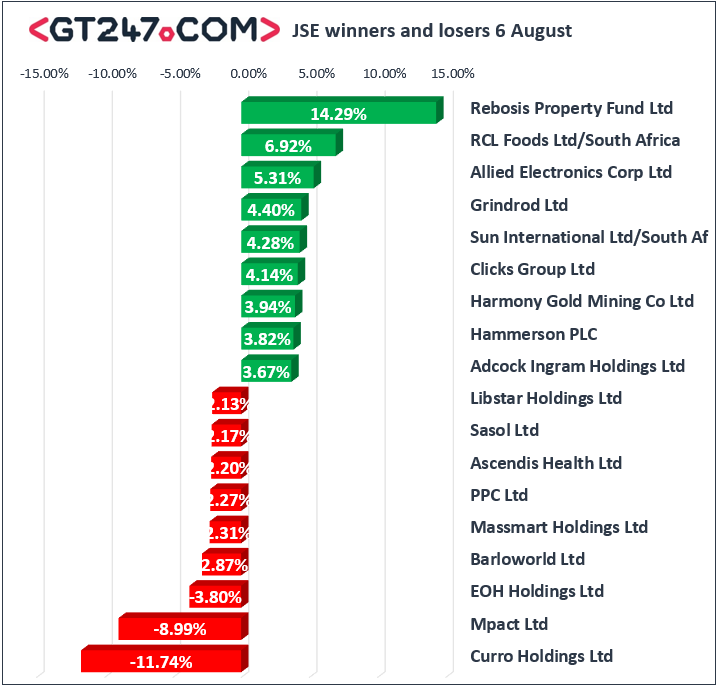 The JSE All-Share index held on to its gains to end the day 0.17% firmer while the JSE Top-40 index inched up 0.1%. The Resources index was the only index to close softer as it dropped a modest 0.12%, while the Industrials and Financials indices added 0.35% and 0.01% respectively.

Brent crude remained subdued for most of the day’s session as it was recorded trading 0.08% firmer at $59.86/barrel just after the JSE close.