The JSE advanced on Wednesday primarily on the back of solid gains on the financials index which were bolstered by the firmer rand.

Global sentiment was also improved ahead of the release of the US Fed’s FOMC meeting minutes from its last policy meeting. The minutes are scheduled to be released at 20.00 CAT. In the USA, better than expected earnings numbers from retail giants Target Corp and Lowe’s also helped lift US equity futures higher, and subsequently we saw the spot market open firmer as well.

Locally, Statistics SA released South Africa’s inflation data for the month of July. CPI YoY slowed down to 4% from a prior recording of 4.5%, while CPI MoM was unchanged from the prior recording of 0.4%. On the back of this data and a relatively flat US currency, the rand advanced against the greenback as it reached a session high of R15.15/$ before it retraced to trade 0.77% firmer at R15.23/$ at 17.00 CAT. 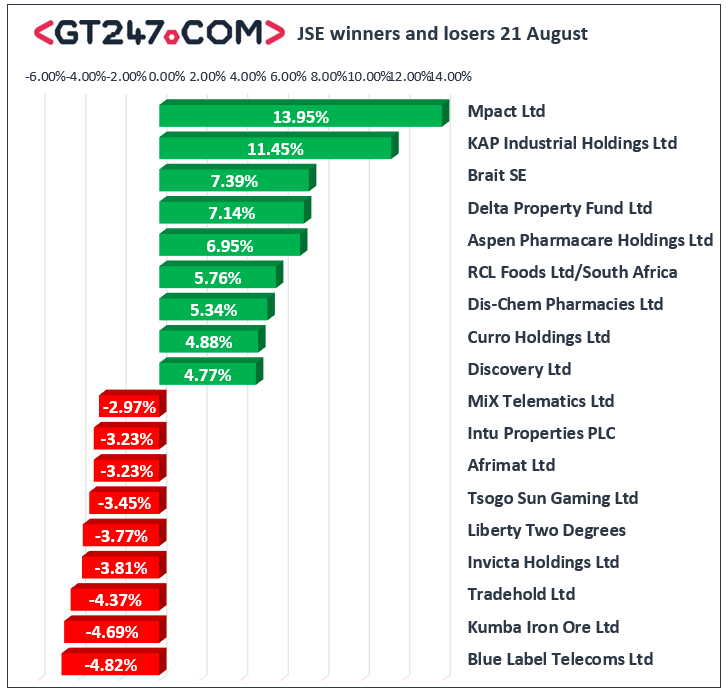 The JSE Top-40 index closed 0.52% higher while the JSE All-Share index added 0.57%. The Resources index was the only major index to close softer as it shed 0.49%. The Financials and Industrials indices managed to add 1.66% and 0.8% respectively.

Brent crude was buoyed by an increase in US crude inventories as indicated by stockpiles data released on Wednesday. The commodity was trading 1.18% firmer at $60.72/barrel just after the JSE close.