The JSE surged for a second consecutive session on Tuesday as it tracked global markets higher.

US indices recorded fresh all-time highs led by tech shares as the main equity bourses continued to show signs of resilience. The upward momentum started off in Asia as the Hang Seng and Shanghai Composite Index closed 1.55% and 1% higher respectively. The Nikkei however closed 0.53% softer. Stocks in Europe traded mostly higher while US equity futures also pointed higher for most of the day’s session before the spot market opened.

On the currency market, the US dollar retreated against a basket of major currencies which saw gains being recorded for emergainsg market currencies including the rand. The local unit peaked at a session high of R14.71. At 17.00 CAT, the rand was trading 0.16% firmer at R14.78/$.

On the local bourse, gains were led by Omnia Holdings [JSE:OMN] which rallied on the back of the release of its half-year trading statement. The stock closed 9.6% higher at R30.14. Rand hedge, Sappi [JSE:SAP] found some traction despite the firmer rand as it surged 5.39% to close at R39.92. Coronation Fund Managers [JSE:CML] climbed despite recording declines in earnings and revenue in its full-year results, which saw the stock close 3.79% to close at R43.30. Rhodes Food Group [JSE:RFG] released an improved set of full year results which saw the stock gain 2.48% to close at R16.50. Index heavyweight, Naspers [JSE:NPN] surged 4.08% to close at R2248.02, while pharmaceutical giant Aspen Pharmacare [JSE:APN] added 2.6% to close at R122.36. Other significant gainers on the day included Nedbank [JSE:NED] which rose 2.5% to close at R238.76, and Anglo American PLC [JSE:AGL] which added 2.04% to close at R393.75. 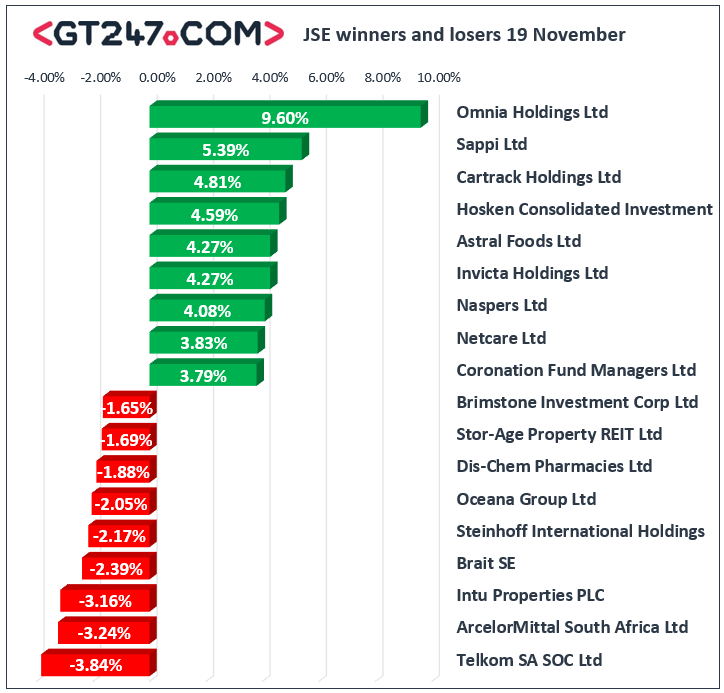 Brent crude continued to retreat from its overnight highs as it was recorded trading 1.57% weaker at $61.47/barrel just after the JSE close.