The local bourse closed weaker on Thursday as global equity markets remained in a significant downtrend.

Following a tech led sell-off in the USA on Wednesday, Asian markets slumped in Thursday’s trading which saw the Shanghai Composite Index fall 4.8%, while the Hang Seng and Nikkei lost 3.54% and 3.89% respectively. Tencent Holdings’ freefall continued as the stock slumped by another 6.77% to close at $HK267.00 on the Hang Seng. The negative trend was recorded across all the major European indices as they all traded in the red.

Most of the blue-chip stocks on the JSE struggled on the day with only four stocks managing to record gains on the day. The biggest rebound of the day was perhaps recorded in Naspers [JSE:NPN] which after falling to a session low of R2500.00, managed to recoup its day’s losses to close 0.91% firmer at R2609.48 per share. JSE listed miners rallied on the day mainly due to higher metal prices. Subsequently miners such as Harmony Gold [JSE:HAR] jumped 18.84% to close at R28.83, Sibanye Stillwater [JSE:SGL] rose 13.46% to close at R11.13, and Lonmin [JSE:LON] closed 10.11% firmer at R9.91 per share. 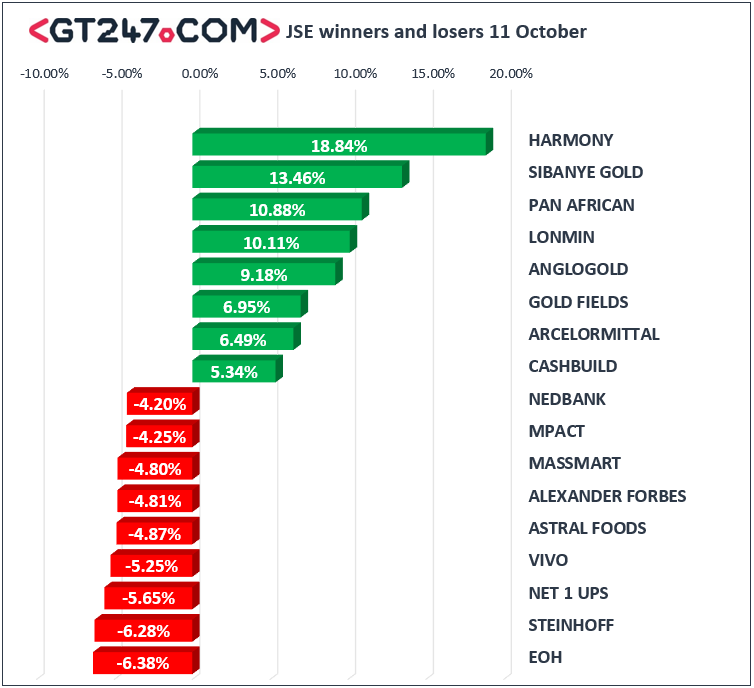 The local bourse did closer weaker on the day, but it had recovered from its session lows. The JSE Top-40 index closed 1.23% lower, while the broader JSE All-Share index lost 1.11%. All the major indices recorded another session of losses with the Financials index losing 2.38%. The Industrials and Resources indices lost 0.79% and 1.05% respectively.

Brent crude struggled to gain on the day as investors continued to shun riskier-assets in the wake of the current equity sell-off. The commodity was trading 2.12% weaker at $81.33/barrel just after the JSE close.