JSE ekes out gains towards the close

Stocks on the JSE struggled for direction on Wednesday as they lacked a catalyst both locally and from international markets.

Stocks in Asia also traded mostly flat aiding to the local index’s lack of direction. This trend also persisted on major European counters as well as the Dow Jones and S&P 500 indices in the USA which opened relatively flat. The exception was the Nasdaq which recorded decent gains as tech stocks surged after Micron Technologies Inc beat profit estimates in its latest earnings release.

Caution remains the default state for investors as they await the next tweet from Donald Trump which could potentially cause a swing in the markets. With US GDP numbers expected on Thursday, investors will eagerly be looking to get a clearer understanding of the impact of the ongoing US-China trade war on economic growth. 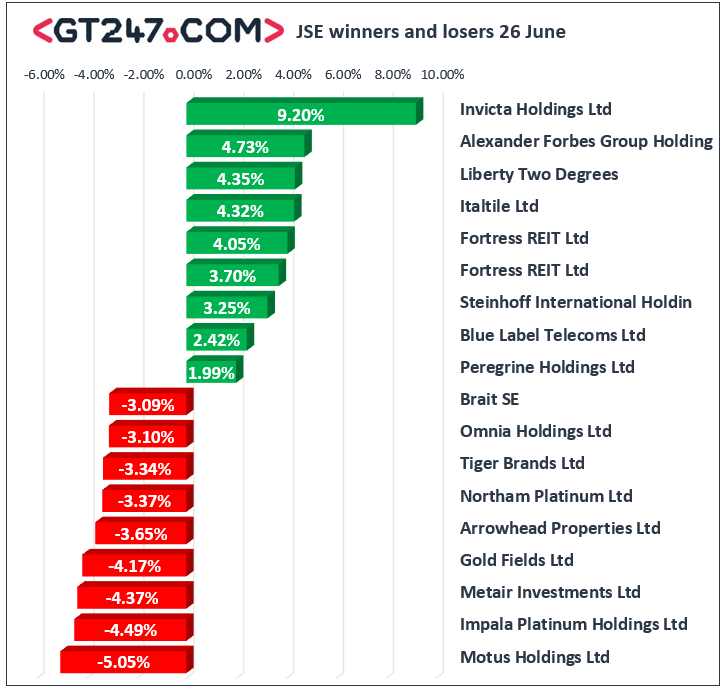 The JSE Top-40 index scored some minor gains towards the close eventually ending the day 0.24% firmer while the broader JSE all-Share index only added 0.08%. The Resources index closed 0.15% softer, however gains were recorded for the Industrials and Financials indices which both added 0.31% respectively.

The rand managed to strengthen later on during today’s session to a session high of R14.24/$ before it was recorded trading 0.46% firmer at R14.27/$ just after the JSE close.

Brent crude rallied today on the back of increased evidence of declining US stockpiles as well as concerns over US-Iran political tensions. The commodity was trading 2.41% firmer at $65.82/barrel.