The JSE retreated on Thursday as pressure mounted on local retailers following the release of weaker trading statements from some of the bourse’s largest retailers.

Trading updates from Mr Price [JSE:MRP] and Woolworths [JSE:WHL] reflected lower than expected sales volumes during the December holidays. This came as a shock to most market participants given the jump that was recorded in South African retail sales data for the month of November released on Wednesday.

In terms of economic data, the South African Reserve Bank decided to keep the repo rate unchanged at 6.75% as the MPC indicated that it continues to assess the stance of monetary policy to be broadly accommodative.

On the financial markets, the bearish sentiment was also driven by weaker closes in Asian markets which saw most European counters trading softer. With US earnings releases ongoing, the current earnings releases from Wall Street’s biggest banks have seen a miss in reported trading revenues compared to what most analysts had forecasted, however the impact has been muted on the major US indices. 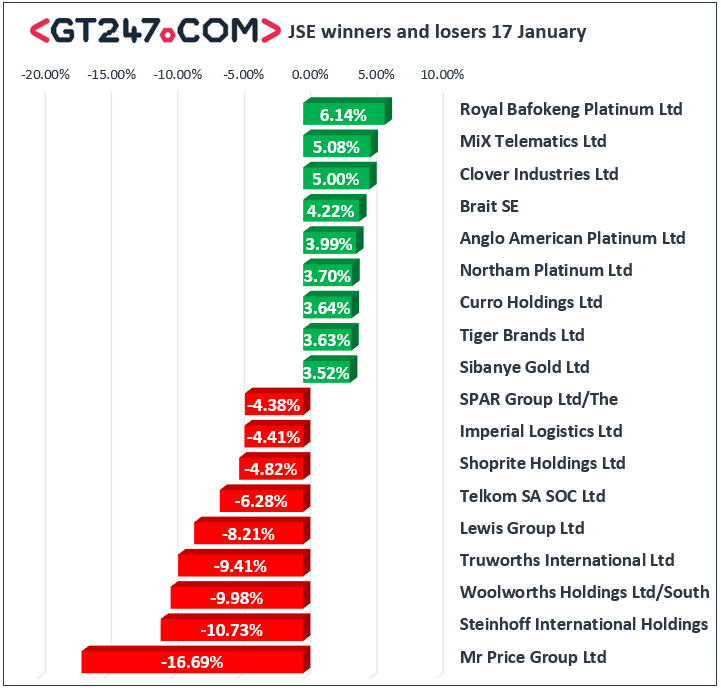 The JSE All-Share Index eventually closed 0.77% weaker, while the JSE Top-40 index lost 0.88%. The Industrials and Financials indices dropped 1.06% and 1.21% respectively, but the Resources index managed mild gains of 0.48%.

Brent crude was trading 0.95% softer at $60.74/barrel just after the JSE close. The weakness has been ignited by higher crude stockpile readings from the USA.