The JSE slipped further on Thursday as it closed softer led by losses on the resources index.

The trend on the JSE contrasted with the trend recorded in other global markets which advanced, with a bigger surge being recorded in Asian counters. 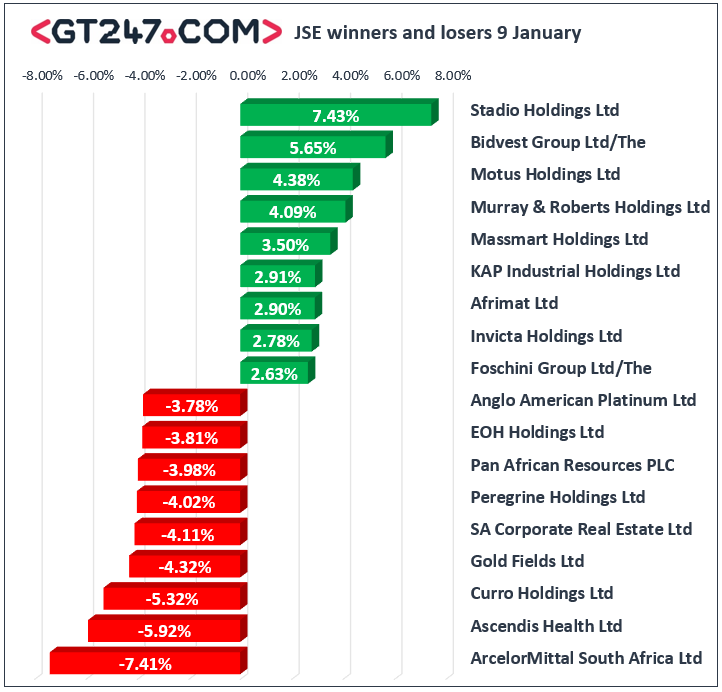 Intu Properties [JSE:ITU] came under pressure in today’s session following poor updates from UK retailers and reports of increasing distress amongst the bulk of them. Intu which specializes in shopping malls came under pressure as a result, eventually closing the day 14.89% lower at R4.80. Other UK focused listed property stocks were not spared as losses were recorded for Hammerson PLC [JSE:HMN] which lost 2.98% to close at R52.04, as well as Capital & Counties [JSE:CCO] which dropped 1.68% to close at R47.90. Gold Fields [JSE:GFI] led losses amongst the miners as it fell 4.32% to close at R89.41, while Sibanye Gold [JSE:SGL] lost 3.05% to close at R35.92. Anglo American Platinum [JSE:AMS] retreated 3.78% as it closed at R1331.16, while Impala Platinum [JSE:IMP] closed at R150.31 after losing 1.69%. Other significant losses were recorded for Dis-Chem Pharmacies [JSE:DCP] which lost 3.16% to close at R26.63, and Sappi [JSE:SAP] which weakened by 3.22% to close at R42.12.

The JSE Top-40 index eventually closed 0.34% softer while the broader JSE All-Share index also dropped 0.34%. The Resources index came under significant pressure as it fell 1.73%, while the Industrials and Financials indices managed to gain 0.37% and 0.27% respectively.

Brent crude slipped lower in today’s session as the commodity was recorded trading 1.22% lower at $64.69/barrel just after the JSE close.