The JSE closed weaker on Monday following a session where it mostly traded in the red.

Global markets struggled after Donald Trump signalled over the weekend that the US was set to announce a brand-new set of tariffs on at least US$200 billion worth of Chinese goods. The concerns around the trade war are mainly centred around the potential negative impact on global economic growth which has been sluggish over the past couple of years.

The JSE rebounded briefly towards the close following the announcement from Naspers in which it indicated that it is planning to unbundle Multichoice and list it separately on the local bourse. The stock rebounded from the red as it bounced from its session low of R3082.44, to reach a session high of R3295.00. The stock eventually closed the day up 0.68% at R3206.42 per share.

Gains in other blue-chip stocks were relatively modest and limited to a handful of stocks. Gold miner, AngloGold Ashanti [JSE:ANG] managed to post gains of 4.07% to end the day at R123.25 per share. Diversified miner, Anglo American PLC [JSE:AGL] rose to R302.43 after adding 1.31%, while its peer BHP Billiton [JSE:BIL] gained 0.43% to close at R299.86 per share. On the broader index, Clientele [JSE:CLI] recorded the biggest jump of the day to end the day 10.3% firmer at R22.39 per share. 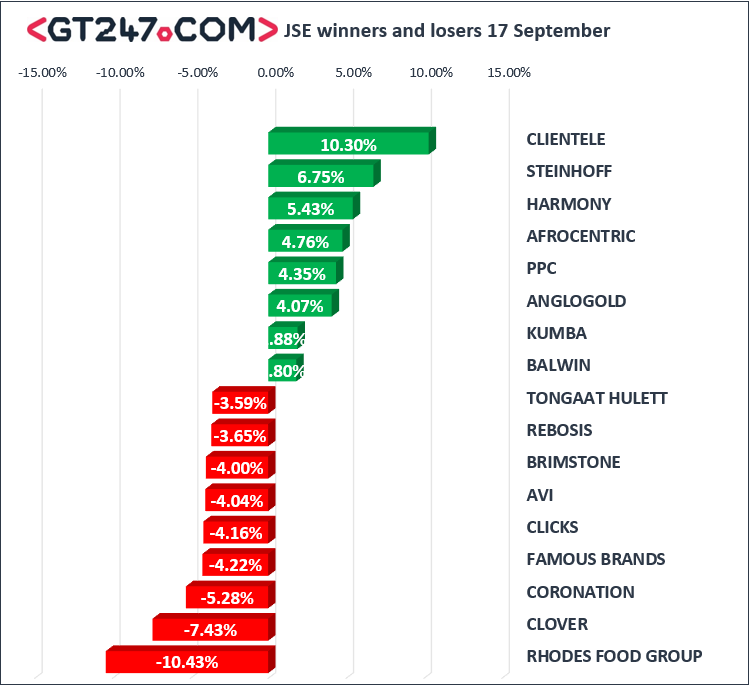 The JSE still closed weaker despite clawing back some losses towards the close. The broader All-Share index closed 0.5% lower, while the blue-chip Top-40 index lost 0.48%. The Resources index was the only major index to record gains as it closed the session up 0.37%. The Financials index lost 1.74% whilst the Industrials index closed 0.46% weaker.

The rand opened the day marginally weaker, but it reversed the losses to trade firmer for most of the day’s session. This was mainly a result of the weakness in the US dollar index which retreated by over half a percent in today’s session. The rand peaked at a session high of R14.86 against the greenback before retracing to trade at R14.89/$ at 17.00 CAT.

Brent crude rose as supply risks due to the prevailing hurricanes rose. The commodity was up 0.63% to trade at $78.58/barrel just after the JSE close.