The JSE closed weaker along with other global markets on Friday as fears were sparked due to concerns over China and the US Fed.

The US Fed struck a positive tone on the US economy on Thursday following their decision to keep interest rates unchanged. As a result, market participants are pricing in a high possibility of a rate hike at the next FOMC meeting which could be negative for stocks. Weaker Chinese PPI and car sales data also ignited fears that the Chinese economy would not be able to grow at the levels that were previously anticipated.

This set-in motion weakness across emerging market currencies as the US dollar rallied against a basket of major currencies. The rand slumped to a session low of R14.34/$ mainly due to this US dollar strength, however at 17.00 CAT the rand had pulled back to R14.27/$.

Blue chips on the JSE weighed on the All-Share index as they traded mostly weaker. Richemont [JSE:CFR] released a decent set of half-year results however the numbers fell short of analyst estimates. Subsequently, the stock fell 6.4% to close at R96.78. Discovery Limited [JSE:DSY] lost 3.6% to end the day at R163.95, while Naspers [JSE:NPN] pulled back by 1.83% to close at R2744.92.

MTN Group [JSE:MTN] announced that it was close to reaching a deal with Nigeria’s central bank with regards to the US$8 billion claim over funds repatriated from the country. The stock lost 2.16% to close at R85.00. Exxaro Resources [JSE:EXX] retreated to close at R148.52 after shedding 4.6%, and Sasol [JSE:SOL] dropped 2.84% to end the day at R472.96. 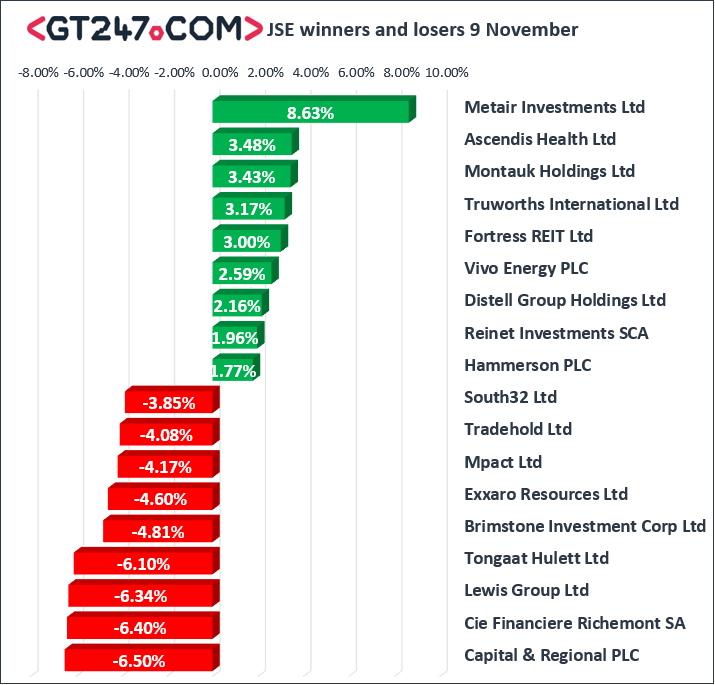 Brent crude remained under significant pressure as it lost 1.61% to trade at $69.51/barrel just after the JSE close.