The bears continued to win the battle on the equities markets on Wednesday as the local market continued to give way.  The world bank cut its 2018 growth forecast for sub-Saharan Africa to 2.7% which was not positive for the currencies of the region.

Asian market opened the day softer as Asian motor vehicle counters eased after a surprise decline in new motor vehicle sales in the US.  The Nikkei retreated 0.66% on the day to trade at 24110, whilst the Hang Seng retreated 0.13% to trade at 27091 points.  Asian markets are beginning to look fickle after a strong run last week, all eyes are now firmly focused on Fridays economic data out of America.

In company news today, EOH [JSE: EOH] released their yearend results, which were not pleasing to the eyes. The business did not declare a dividend for the first time in 16 years, the companies Headline earnings per share dropped from R7.97billion to R2.78 billion for the same reporting period last year. As is the case with many businesses in South Africa, the business has had to sell some assets to resize their operations in a bid to remain profitable and focused on their core business. 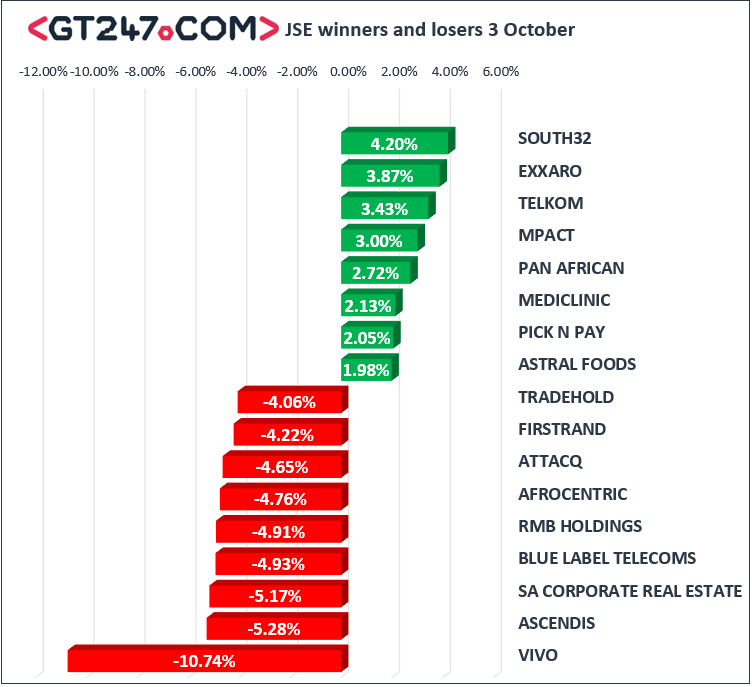 There were several stocks that went ex-dividend on the day, however they did not make the biggest losers list on the day.  Major losses were recorded by Vivo technologies which recorded a 10.74% loss on the day as Ascendis health [JSE: ASC], Blue Label [JSE: BLU] and RMB [JSE: RMH] recorded losses of 5.28%, 4.93% and 4.91% respectively.

The Rand was flat against the dollar on Wednesday and was trading at R14.36 to the dollar. The local unit was marginally firmer against the Euro and one Euro was changing hands at R16.54. The rand was also flat against the Pound and was trading at R18.66 for one Pound at the time of writing. Britain continues to fight its Brexit demons as there is no clear pathway for Theresa May and the conservative government.  There appears to be some uneasiness in the Eurozone as concerns that the Italian government and Brussels seem to be on a collision course due to Italian government budgetary concerns.  South African 10 Year Bond (R186) yields were flat on the day and were trading at 9.09% at 17:00 CAT.

Commodities were generally flat on the day gold was down 70c to trade at $1206.30/ounce. Silver and Platinum were marginally firmer and were trading at $14.76/ pound and $838/ounce respectively.   Brent crude continued to advance, a barrel of crude was changing hands at $85.08 having posted an intraday high of $85.33