The JSE retreated to close softer on Wednesday as it was dragged down mainly by blue-chips on the financials index.

Financials on the local bourse weakened as the rand had another volatile trading session. The rand fell to a session low of R14.15/$ before it recovered to trade 0.1% firmer at R14.08/$ at 17.00 CAT. There was some positive economic data for South Africa as Standard Bank released its PMI reading for June which came in at 49.7 from a prior recording of 49.3. The US dollar traded relatively flat on the day even after disappointments from US ISM Non-Manufacturing PMI data and ADP jobs data.

Local stocks took a leaf from Asian markets which fell in Wednesday’s trading session which saw the benchmark Shanghai Composite Index drop 1.11%, while in Hong Kong the Hang Seng lost 0.07%. In Japan the Nikkei closed 0.53% weaker. Stocks in Europe shrugged off the negative sentiment from the East as they advanced on the day while US markets also edged higher ahead of the USA’s Independence Day holiday on Thursday. 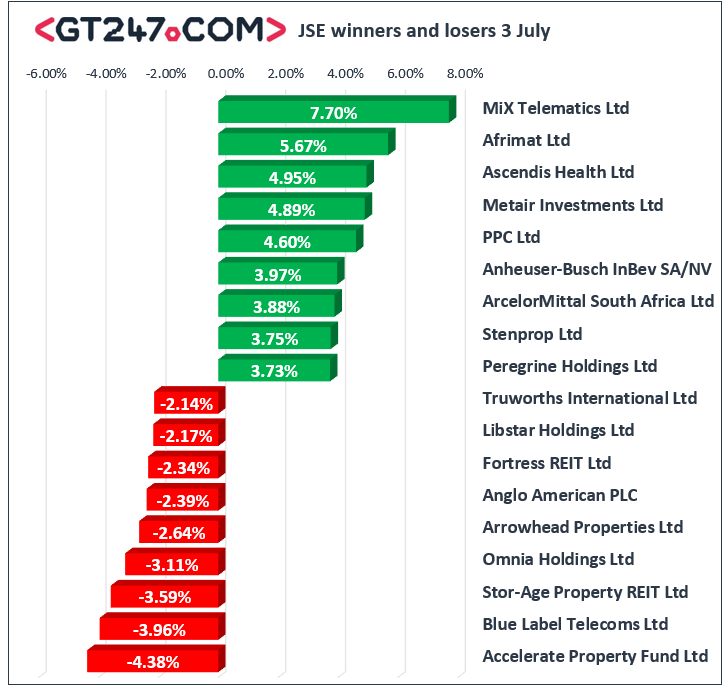 The blue-chip JSE Top-40 index eventually closed 0.25% weaker while the broader JSE All-Share index dropped 0.13%. The Financials index pulled back marginally towards the close as it closed 0.81% while the Resources index dropped 0.33%. The Industrials index recouped earlier losses to end the day 0.15% firmer.

Brent crude edged higher as stockpiles data indicated lower than forecasted oil inventories in the USA. The commodity was trading 0.93% firmer at $62.98/barrel just after the JSE close.