The JSE shrugged off losses recorded in Asian markets trading earlier as it closed firmer on Wednesday.

The gains recorded on the local bourse were modest as global markets remain relatively tense about Brexit and global economic growth. The JSE seemed to borrow a leaf from the minor gains that were recorded across most European major indices, which were lifted by the release of positive US durable goods orders data. Local economic data was not as inspiring given that the South African BER Business Confidence indicator for the 1st quarter, fell to a level of 28 which was last recorded during the financial crisis of 2009. This was worse than forecasted level of 32 as well as the prior recording of 31.

Libstar Holdings [JSE:LIB] declared a maiden cash dividend of 22 cents per share in its full-year results despite reporting a decrease in basic and diluted headline earnings per share. The decrease in earnings was mainly attributed to an impairment in its niche beverage category. The stock rallied 10.28% to end the day at R7.83. Coal miner Exxaro Resources [JSE:EXX] gained significant traction as it climbed 4.89% to end the day at R149.99, while Sibanye Stillwater [JSE:SGL] picked up 4.53% to close at R14.77. Diversified miner, BHP Group [JSE:BHP] added 1.79% to end the day at R333.03, while commodity trader Glencore [JSE:GLN] closed 2.37% firmer at R58.34. Old Mutual [JSE:OMU] rose 2.2% to close at R21.36, while Quilter [JSE:QLT] gained 1.96% to close at R26.51. 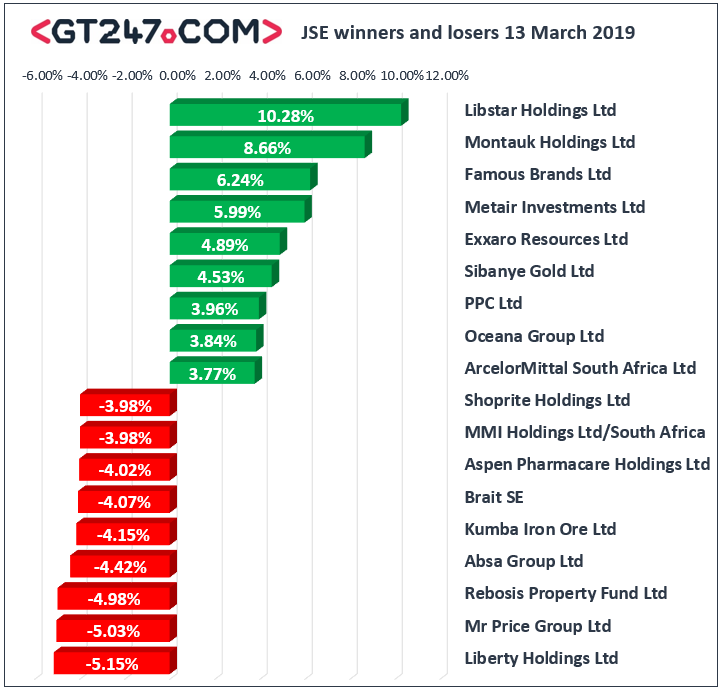 The JSE All-Share index eventually closed 0.12% firmer while the JSE Top-40 index added 0.11%. The Industrials and Resources indices managed to post gains of 0.18% and 1.14% respectively, however the weaker rand weighed on the Financials index which dropped 1%.

Brent crude extended its gains as reports surfaced of a potential US supply decline in this week’s crude oil inventories data. The commodity was up 1% to trade at $67.34/barrel just after the JSE close.