The JSE swung into gains towards the close on Tuesday before closing flat, following a session where it traded mostly softer.

Locally focus was on South Africa’s GDP numbers for the 2nd quarter. The economy recorded better than expected growth of 3.1% QoQ compared to the consensus estimate of 2.4% growth. GDP YoY expanded by 0.9% compared to a prior recording of zero growth. Despite this GDP data, there was some gloom following the release of the ABSA Manufacturing PMI which fell to 45.7 from a prior recording of 52.1.

Stocks on the JSE were rather mixed in today’s session but notable gains were recorded for Aspen Pharmacare [JSE:APN] following the release of a trading statement  which highlighted the a decrease in net debt and a positive cash flow. The stock rallied 7.26% to close at R82.41. Murray and Roberts [JSE:MUR] surged to close amongst the day’s biggest gainers after it added 7.44% to close at R13.00. Retailer, The Foschini Group [JSE:TFG] advanced 5.9% to close at R157.63, while its sector peer Truworths [JSE:TRU] managed to gain 2.2% to close at R53.40. DRD Gold [JSE:DRD] was buoyed the release of a positive set of full-year results which saw the stock rally 5.19% to close at R7.10, while AngloGold Ashanti [JSE:ANG] gained 2.61% to close at R352.88. 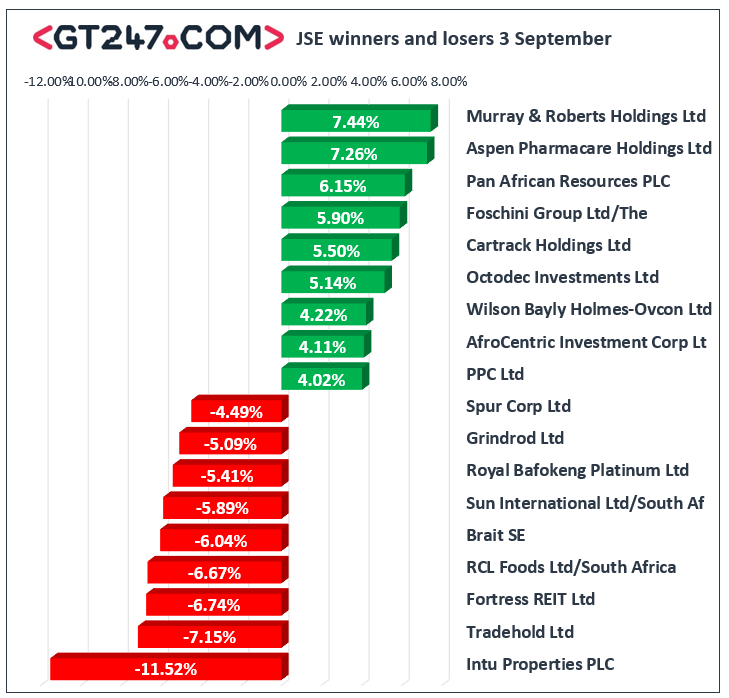 The JSE All-Share index eventually closed 0.08% softer while the JSE Top-40 index shed 0.03%. The Resources index was the biggest casualty of the day as it lost 0.71%. The Financials and Industrials indices managed to gain 0.68% and 0.06% respectively.

Brent crude slipped further in today’s session to be recorded trading 1.77% weaker at $57.63/barrel just after the JSE close.