The JSE had a mixed session on Friday as it eventually closed flat despite opening the session weaker.

Equities in Asia also struggled for direction in Friday’s session which saw the Nikkei and Hang Seng drop 0.45% and 0.69% respectively, while in Shanghai Composite Index only inched up 0.19%. Stocks in Europe tracked mostly higher while in the USA investors waited in anticipation of the first estimate of US GDP QoQ which, although slower came in better than expected at 2.1% compared to a forecast of 1.8%. This saw US markets open higher with tech stocks leading the charge on the back of good earnings from the likes of Google parent Alphabet.

On the currency market the US dollar continued to advance which did not play into the rand’s fortunes as the local currency slipped further. The rand fell to a session low of R14.26/$ before it was recorded trading 1.38% weaker at R14.26/$ at 17.00 CAT. 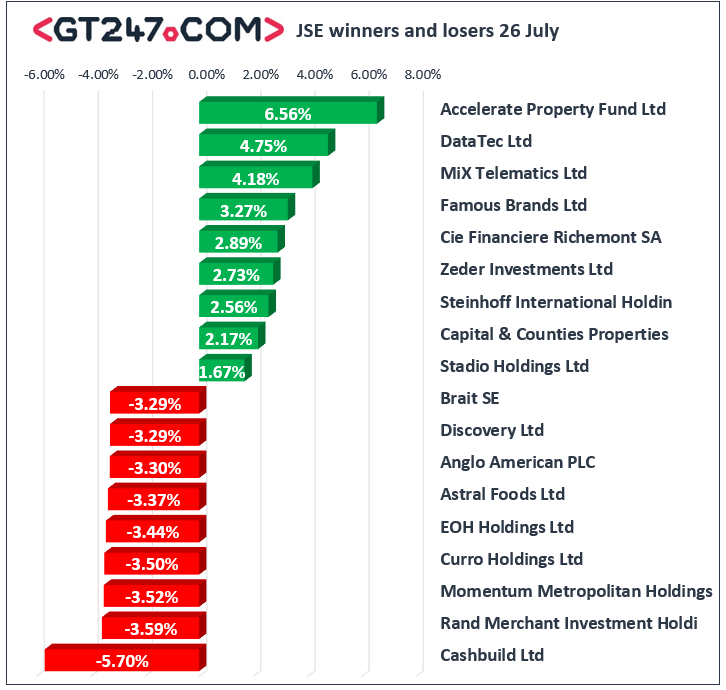 Gains were modest especially for blue-chips stocks with significant gains being recorded for Richemont [JSE:CFR] which advanced 2.89% to close at R124.85, while Bid Corporation [JSE:BID] gained 1.46% to close at R313.27. Listed property stock Capital and Counties [JSE:CCO] managed to post gains of 2.17% to end the day at R38.21, while Accelerate Property Fund [JSE:APF] closed as one of the day’s biggest gainers after advancing 6.56% to close at R3.25. Significant gains were also recorded for Zeder Investments [JSE:ZED] which rose 2.73% to close at R4.90, Vodacom [JSE:VOD] which gained 1.29% to close at R115.00, and British American Tobacco [JSE:BTI] which closed at R536.30 after gaining 1.15%.

The JSE All-Share index eventually closed 0.08% weaker while the JSE Top-40 index inched up 0.01%. The Financials and Resources indices lost 1.23% and 0.41% respectively, while the Industrials index managed to gain 0.59%.

Brent crude eased from its session highs however it was still trading firmer on the week as Middle East tensions and a drop in US inventories have seen it gain. The commodity was trading 0.14% weaker at $63.30/barrel just after the JSE close.