The JSE traded mostly softer on Wednesday as the selling pressure from other global markets crept onto the local bourse.

Equity indexes in Asia traded softer as geopolitical tensions escalated between Pakistan and India following news of two Indian jets that were downed by Pakistan. The major Asian bourse fared better than most would have thought, as the Hang Seng only closed 0.05% weaker while the Shanghai Composite Index lost 0.17%. Weakness was recorded across most of Europe’s equity indexes which tracked lower on the day.

On the JSE, all eyes were on the listing of Multichoice [JSE:MCG] which was unbundled from Naspers [JSE:NPN]. The share opened at R95.50, briefly traded at a session low of R93.08 before it rallied to peak at a session high of R115.60. The stock moderated to eventually close the day at R106.01 as over 35 million shares exchanged hands on the day. 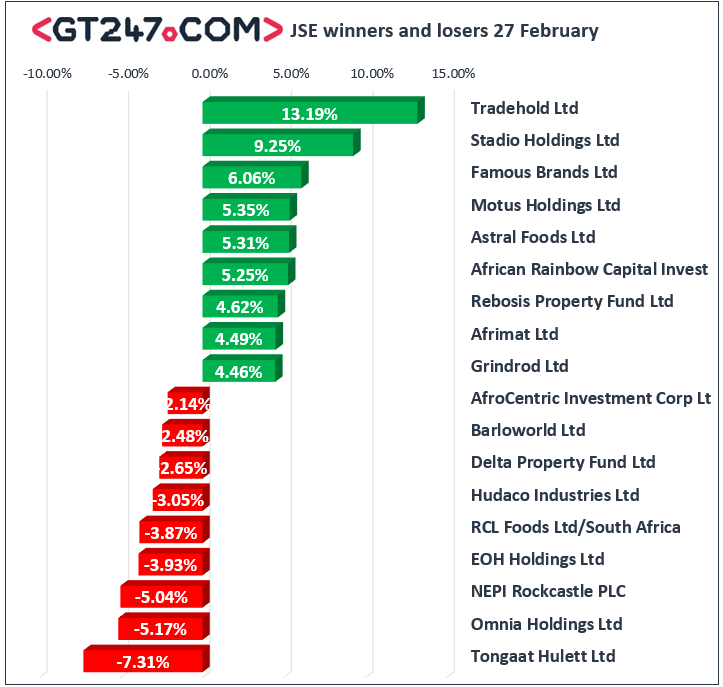 The JSE Top-40 index eventually closed 0.07% softer while the JSE All-Share index inched up 0.03. The Resources index managed to post gains of 1.34%, however the Industrials and Financials indices lost 0.34% and 0.88% respectively.

The rand traded mostly softer on the day as the greenback advanced on the back of tensions in between Pakistan and India. At 17.00 CAT, the rand was trading 0.6% weaker at R13.91/$.

Brent crude advanced to peak at a session high of $66.38/barrel before it was recorded trading 0.87% firmer at $65.78/barrel just after the JSE close.