The JSE closed firmer on Wednesday after a relatively muted trading session.

The local bourse struggled to find a significant catalyst for direction as it swung marginally between gains and losses. Locally, Statistics SA released inflation numbers for the month of June. CPI YoY climbed up to 4.6% from a prior recording 4.4%, while CPI MoM increased to 0.4% from a prior recorded level of 0.2%.

Retail sales numbers were slightly more positive as they beat most analysts’ estimates. Retail sales YoY recorded a surprise jump of 1.9% for the month of May which was higher than the forecasted 0.8%. MoM the figure rose to 1.1% which is a significant jump compared to the contraction of 1.2% recorded prior.

There was a rather muted response by the rand to these two sets of data. The rand weakened mainly due to the stronger US dollar which has recovered significantly over the past two trading sessions. The rand weakened to a session low of R13.37/$ before rebounding to trade at R13.27/$ at 17.00 CAT. 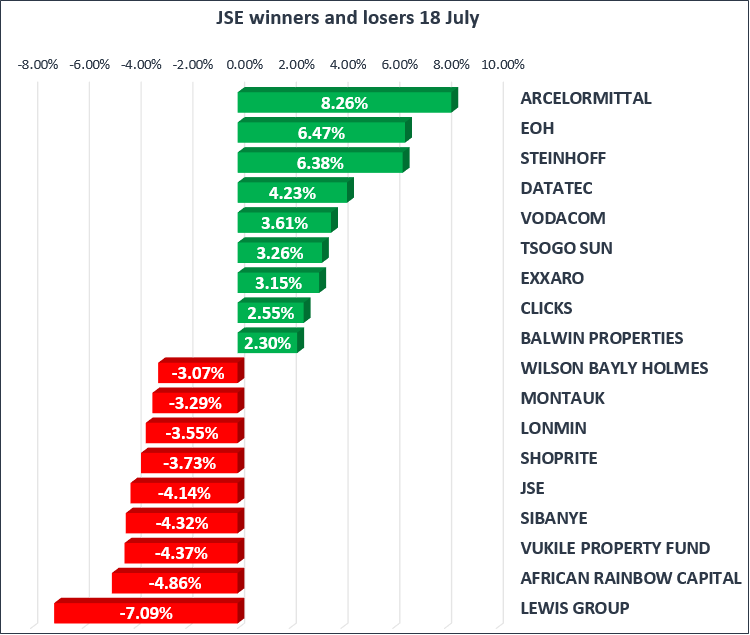 Brent crude traded mostly softer on Wednesday and came under more pressure following the release of US inventories data which recorded a surprise gain. The commodity slipped to a session low of $71.19/barrel before retracing to trade at $71.87/barrel just after the JSE close.