JSE caps off week of gains

The JSE capped off a week of consecutive gains as it closed firmer on Friday led by index heavyweight Naspers and miners.

The local bourse shrugged off a mixed session in Asia as it opened firmer and continued to inch higher during the day’s session. European markets were trading marginally firmer as investors assessed the trade talks between China and the USA, as well as speeches from Fed governors at the Jackson Hole Symposium.

On the JSE, Naspers [JSE:NPN] rose following their annual meeting held on Friday, where the chairman indicated that they are taking steps to reduce its exposure to the JSE by narrowing its valuation gap to Tencent Holdings. The stock gained 2.82% tom close at R3538.06 per share. Clicks [JSE:CLS] picked up another 3.48% to close at R203.65 per share while Netcare [JSE:NTC] firmed to R28.99 after the stock gained 2.19%. 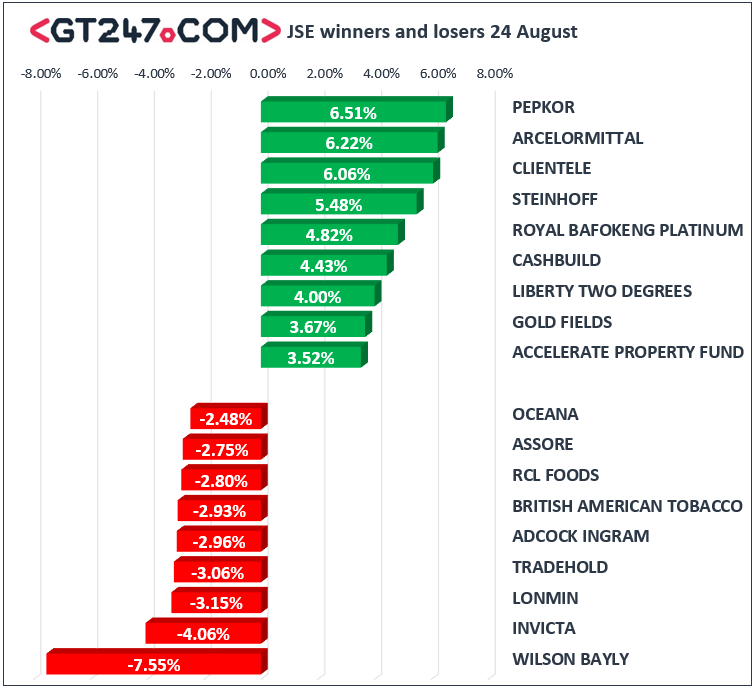 The JSE remained buoyant as it closed 1.02% firmer while the JSE Top-40 index gained 1.17%. All the major indices managed to close in the green. The Industrials index climbed 1.34%, while the Resources and Financials indices gained 0.98% and 0.52% respectively.

The US dollar erased all of Thursday’s gains which saw gold and the rand rebound from their overnight lows. The rand strengthened to a session high of R14.17/$ before retracing to trade at R14.24/$ at 17.00 CAT.