The JSE bucked the trend in other global markets as it surged to close firmer on Monday.

With Chinese markets closed for a holiday, there was little sentiment that filtered through from Asian trading. European stocks traded moderately firmer, although there was disappointment stemming from German factory orders data, which contracted by 0.6% MoM in September. In the USA, the sentiment was rather pessimistic on the back of concerns over the extent of the Fed’s policy easing and the possibility of a deal at the next round of Sino-US trade talks.

Emerging market currencies struggled on the day, relinquishing some of the gains made towards the end of last week. The rand fell to a session low of R15.18/$ despite having traded as high as R15.02 just after the open. At 17.00 CAT, the rand was trading 0.7% weaker at R15.14/$. 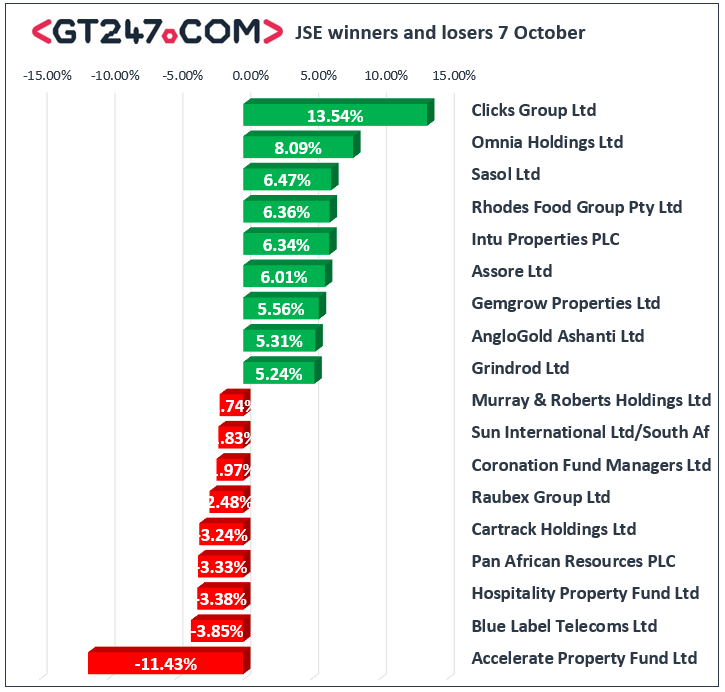 The JSE All-Share index eventually closed 1.43% higher, while the blue-chip JSE Top-40 index gained 1.51%. The Resources index led gains amongst the major indices as it closed 2.73% higher. The Industrials and Financials indices gained 1.29% and 0.22%, respectively.

Brent crude rebounded in today’s session as it was eventually recorded trading 2.12% firmer at $59.61/barrel just after the JSE close.