The JSE advanced on Friday as retailers and financials continued to lift the local bourse higher.

Blue-chips were trading mostly in positive territory which helped maintain the upward momentum on the JSE. Retailer, Truworths [JSE:TRU] was buoyed by the release of a positive trading statement for the full-year ended 1 July 2018. The stock added 3.22% to close at R79.24 per share. The Foschini Group [JSE:TFG] added 3.18% to close at R166.39, while Mr Price [JSE:MRP] firmed to R225.08 after adding 2.22%.

BlueTel Communications [JSE:BLU] has traded under significant pressure lately however in today’s session it recouped some of those losses to close at R9.08 per share after jumping 8.87%. Rhodes Food Group [JSE:RFG] added 3.35% to close at R18.82, while British American Tobacco [JSE:BTI] firmed to close at R695.36 after posting gains of 3.72%. Banks, ABSA Group [JSE:ABG] and Capitec Holdings [JSE:CPI] gained 3.28% and 2.72% respectively. 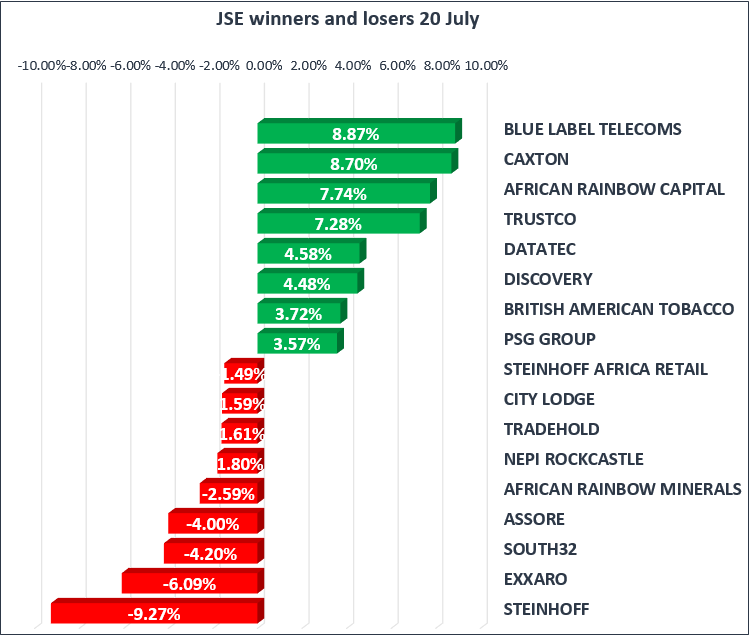 The local bourse gained more momentum towards the close which saw the JSE All-Share index close 1.27% higher, while the JSE Top-40 index gained 1.4%. The Financials and Industrials indices managed to gain 1.99% and 1.89% respectively, however the Resources index retreated to end the day 0.56% softer. For this trading week, the JSE firmed by 1.11%.