The JSE advanced on Tuesday on the back of broad-based gains across most global indices.

Positive Chinese housing data led to gains on the Shanghai Composite Index which closed 2.77% higher, while the Hang Seng managed to gain 1.07%. The Japanese Nikkei was marginally firmer as it managed to add 0.24%. In Europe, gains were fairly modest but all the major indices traded in the green nonetheless. USA, earnings season continues to dominate market trends. Earnings from US banks which have been released so far have not been impressive but global conglomerate, Johnson & Johnson’s earnings results managed to beat market expectations on Tuesday, lifting the US indices higher in the process.

On the currency market, the US dollar recouped some losses from the prior two sessions as it climbed to a session high of 97.07 index points on the US dollar index. The rand was mildly softer as a result as it fell to a session low of R14.11/$ before retracing to trade 0.27% weaker at R14.07/$ at 17.00 CAT.

On the JSE the standout mover of the day was EOH Holdings [JSE:EOH] which rocketed 55.23% as it closed at R20.18 following the release of its half-year financial results, which gave the market clarity on the company’s financial status following recent news headlines that the company had lost a contract with Microsoft. MTN Group [JSE:MTN] also recorded a decent rally as it managed to climb 3.97% to close at R101.89, while fellow telecoms provider Telkom [JSE:TKG] gained 3.79% to close at R82.40. Gold miner AngloGold Ashanti [JSE:ANG] added 3.18% as it closed at R186.38, while Gold Fields [JSE:GFI] closed 2.45% higher at R53.87. Index heavyweight Naspers [JSE:NPN] rose 2.29% to end the day at R3590.50. 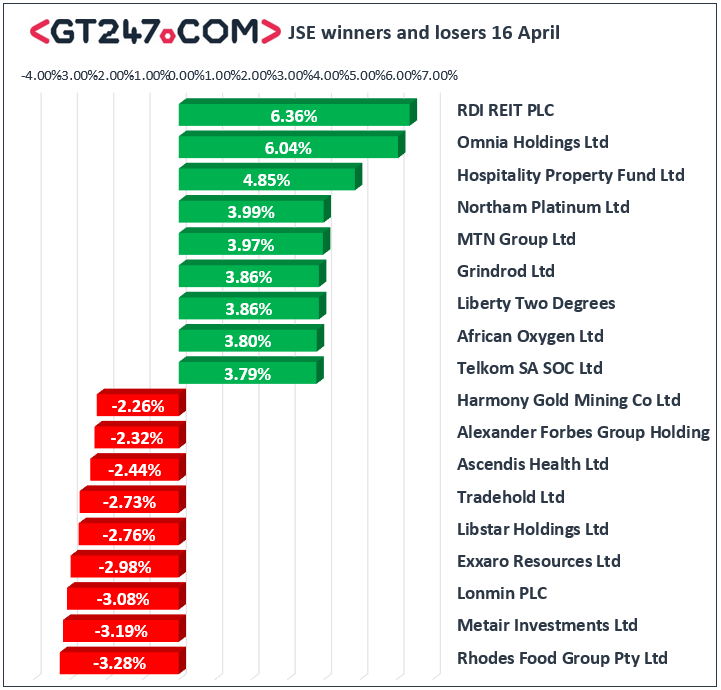 Another mixed trading session ensued for brent crude which peaked at a session high of $71.41/barrel. It was trading 0.01% firmer at $71.17/barrel just after the JSE close.