Industrials lead gains on the JSE

Industrials lead gains on the JSE

The JSE got off to a strong start for the week as it closed firmer on Monday led by gains on the industrials index.

The local bourse took a leaf from the firmer closes in Asian markets where the Hang Seng and Shanghai Composite Index closed 1.35% and 0.8% higher respectively, while the Nikkei managed gains of 0.49%. Unfortunately, this momentum did not carry into the European trading session where stocks traded mostly softer. The drop in European stocks coincided with the drop in US equity futures which retreated on the back of renewed pessimism about a trade deal being reached between the USA and China.

Industrials led gains on the local bourse mainly on the back of gains recorded in index heavyweights Naspers and Prosus. Prosus [JSE:PRX] which is subsidiary of Naspers released a half-year trading statement indicating that company is expecting a small increase in core headline earnings, which resulted in the stock closing 2.5% higher at R1012.49. Naspers [JSE:NPN] which also released a trading statement recorded gains of 2.37% to close at R2160.00. Netcare [JSE:NTC] highlighted a significant jump in headline earnings per share in its full-year results which saw the stock rally 5.16% to close at R18.55. Rand hedge, British American Tobacco [JSE:BTI] gained 2.58% as it closed at R549.85, while Sappi [JSE:SAP] managed to post gains of 3.53% to close at R37.88. Other significant risers on the day included Hammerson PLC [JSE:HMN] which advanced 2.48% to close at R55.41, Sibanye Gold [JSE:SGL] which rose 1.64% to close at R28.48, and Bid Corporation [JSE:BID] which closed at R344.19 after gaining 1.61%. 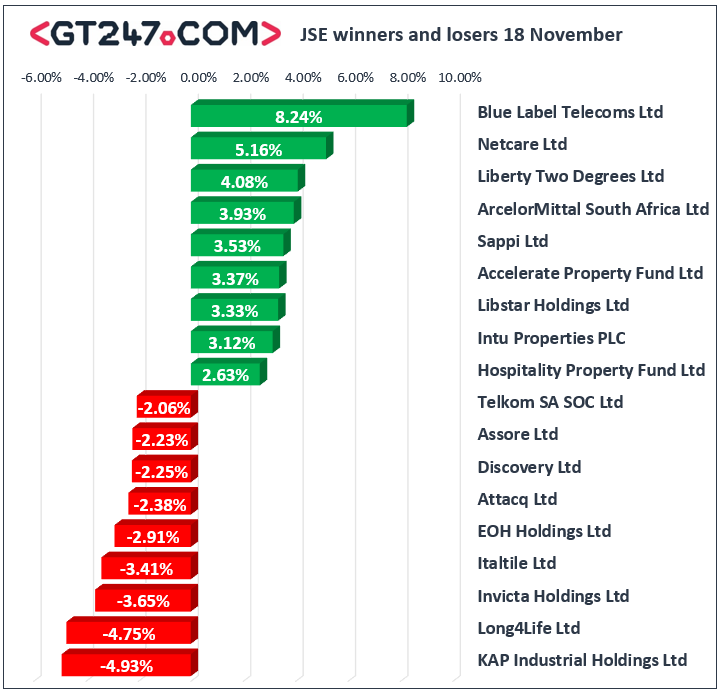 The JSE All-Share index closed 0.62% higher while the JSE Top-40 index rose 0.82%. The Financials index came under pressure because of the weaker rand as it lost 0.31%, however the Industrials and Resources indices gained 1.28% and 0.65% respectively.

Brent crude retreated as news of China’s pessimism about getting a trade deal surfaced. The commodity was trading 0.96% softer at $62.69/barrel just after the JSE close.