Since the latest JOBS report, all eyes have been focussed on the FOMC’s Powell to give guidance to which direction the FED will head into with regards to interest rate cuts. The FED chair has made it clear that the Federal Reserve will remain independent and hinted that an interest rate cut is all but certain in July.

The markets have been gaining momentum since Powell’s testimony in front of Congress and by looking at the current CNNBusiness Fear and Greed Index we can see that we are entering a possible phase of “Greed” but we might get a better perspective once the FED makes its decision on rates.

We have recently seen new all-time highs reached on the major stock Indices in the U.S. with the S&P 500 crossing the 3000 mark. The Dow Jones went well beyond the 27000 mark for the first time ever as talks of recession subsides.

Some headway is also being made with the trade negotiations between the U.S and China as U.S. Treasury Secretary Steven Mnuchin stated that if talks over the phone go according to plan this week, a trip to Beijing might be on the cards to hold trade negotiations.

The U.S earnings season has kicked off yesterday and this round of earnings reports will no doubtingly deliver a lot of surprizes. Some of the major investment banks are set to release their earnings today which include, J.P Morgan, Goldman Sachs and Wells Fargo.

South Africa - Amidst fraud and corruption scandals becoming an everyday occurrence, SA Inc. has benefitted from the U.S Fed’s dovish outlook on interest rates. The South African Rand (ZAR) has gained over 1% since the start of July following a weaker U.S Dollar (USD).

Emerging Market currency might benefit more from the greenback’s decline but for South Africa a interest rate decision still looms this coming Thursday. We might see the South African Reserve Bank (SARB) cut rates which could see the Rand Battle to stay on its current trajectory. On the other side of the coin, we might see the risk-on sentiment towards emerging markets continue to 2020 if the FED stays on its current course.

The below chart gives us a closer look at YTD performance of the other main Middle East/ Africa markets to take note of: 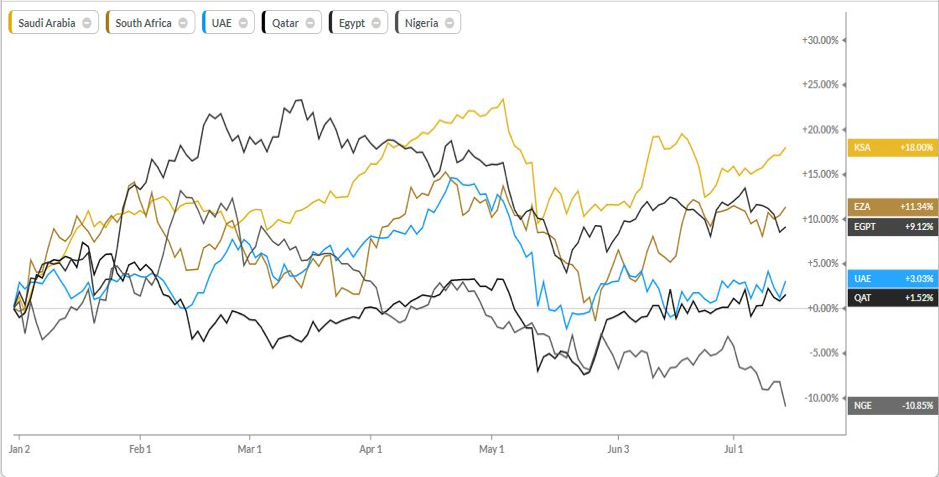 Some technical points to look out for on the ALSI

Brexit is still at the top of the POPS in Britain as the British Pound (GBP) remains under pressure against the Euro as British holiday makers start to set sail. The latest Brexit date is set for the 31st of October 2019 with or without a deal it seems.

Across the pond the Eurozone has entered renewed fears of economic recession as an economic slowdown is gripping Europe. The Eurozone is facing a weaker second half of the year as the European Commission revises its outlook lower for 2020 despite industrial production growth this month.

To add onto the economic pressure the U.S will get the go ahead by the World Trade Organization to start implementing new tariffs on Europe.

The below chart gives us a closer look at YTD performance of the other main Eurozone markets to take note of: 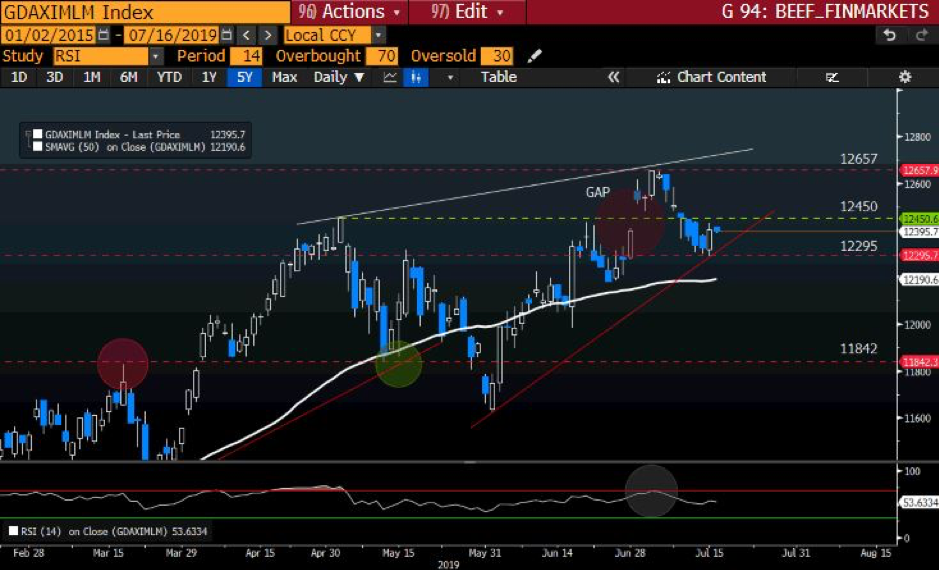