The JSE retreated on Wednesday led mainly by losses recorded amongst some blue-chip stocks.

Global stocks fluctuated as investors searched for fresh clues on market direction. In Asia, the Hang Seng and Shanghai Composite Index lost .0.82% and 0.64% respectively, while in Japan the Nikkei reopened after having been closed for a holiday on Tuesday eventually closing 0.34% firmer. In Europe, stocks were mixed while the major indices in the USA opened flat.

Locally, Statistics SA released inflation data for the month of September. CPI YoY slowed to 4.1% from a prior recording of 4.3%, which was also better than the forecast of 4.2%. CPI MoM was unchanged from the prior recording 0.3%.

Despite this positive data the rand did lose some ground against the US dollar as it dropped to a session low of R14.70/$. The rand rebounded marginally, and it was recorded trading 0.33% weaker at R14.62/$ at 17.00 CAT. 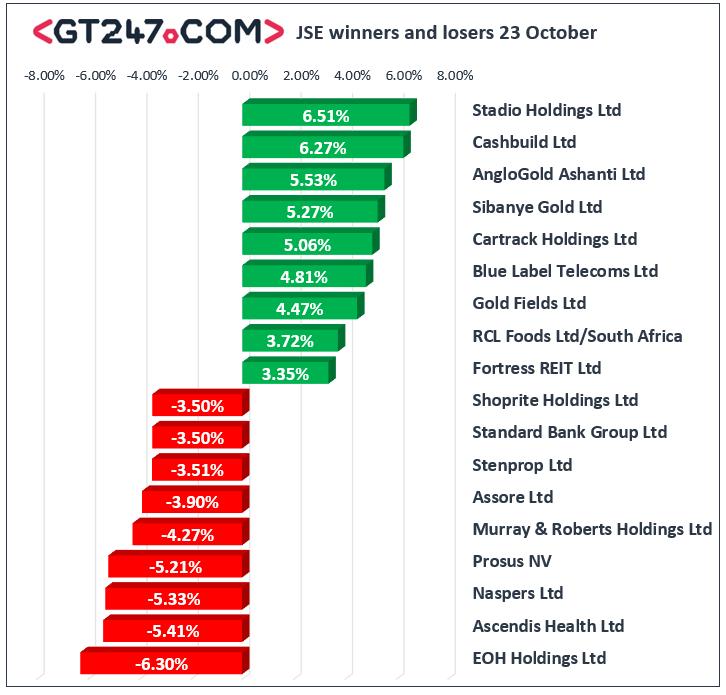 The JSE All-Share index eventually closed 0.65% lower while the JSE Top-40 index lost 0.74%.  The Resources index was the only major index to record gains as it climbed 1.71%. The Industrials and Financials indices fell 1.91% and 1.13% respectively.

Brent crude remained steady in today’s session and it was recorded trading 0.72% firmer at $60.13/barrel just after the JSE close.